Kelly off to UK for international PBA finals 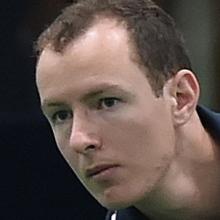 Andrew Kelly
Andrew Kelly won his air ticket to the United Kingdom by winning the world singles final at the New Zealand PBA finals in Wellington at the weekend.

He relished conditions at the new indoor facility at the Naenae Bowling Club to win his fourth trip to the international PBA finals. He contested the Welsh singles in 2009, Scottish singles in 2015 and the world indoor pairs earlier this year.

Kelly (28), a Christchurch engineer, was the only member of the Dunedin PBA to qualify for the international PBA finals in the United Kingdom. Kelly, who started playing bowls when he was a pupil at Waitaki Boys' High School, used his power shots to perfection to win his last two games.

His two drives in the three-end tie breaker were crucial when he beat Dean Drummond (Hawke's Bay) 11-6, 4-9, 2-1 in the semifinal. He killed the third end with his first and then drove off Drummond's close shot bowl with his second drive.

He beat Stephen Zino (Wellington) 11-9, 8-3 in the final by scoring fours on two ends in the first set and by two telling upshots in the second set. Zino beat Craig Merrilees (Southland) in the semifinals.

Kelly was beaten in the semifinals of the Shanghai singles that was won by Lyall Soper (Southland), who finished runner-up to Murray Glassey (Hawke's Bay) in the final.

Dunedin's Keri Rupene and Marty Kreft narrowly missed a trip to the world indoor pairs when they were beaten 6-5, 4-5, 2-1 in the final by Glassey and Paul Sorensen (Hawke's Bay).

Dunedin veteran Ken Walker was beaten in the semifinal of the international singles by Rob Ashton (Auckland) 9-2, 4-9, 0-2. Ashton beat Merrilees 10-6, 8-6 in the final.

Dunedin's Russell Dawe and Sony Tautari (Southland) were both beaten in the semifinals of the Scottish singles.