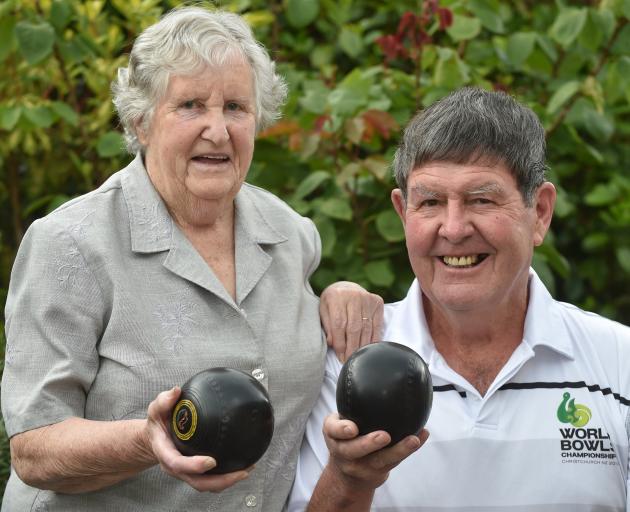 Margaret and Bruce Malcolm at their Sawyers Bay home. Photo: Peter McIntosh.
Bruce and Margaret Malcolm have done plenty in their lives on and off the sporting field. Alistair McMurran talks to the couple who show no sign of slowing down.

Margaret Malcolm experienced tragedy early in her sporting life when her brother, Bandy Scoles, was killed in a railway accident in 1954.

"He was coming up to Dunedin by train to watch me play in an Otago basketball trial," Margaret (79) said.

The annual club rugby match between Zingari-Richmond and Harbour for the Scoles Memorial Trophy is played in memory of her brother — William "Bandy" Scoles, the Port Chalmers premier halfback in the early 1950s.

He was killed when he fell under a train while climbing aboard to travel from Port Chalmers to Dunedin on August 28.

"I never knew it was Bandy who was killed until I got to the Garrison Hall in Dowling St," Margaret said.

A man from Port Chalmers came into the hall to tell Margaret what happened.

It was a tragic time for the family because Margaret’s father, Steve Scoles, had been drowned when fishing with his brother a few months earlier.

"The boat capsized and he had thigh gumboots on and was pulled under the water."

Bandy Scoles, who had an Otago trial as a halfback in the year he died, was aged 21 and was on the verge of a great rugby career.

Bandy was a tough character and worked as a plasterer. He  was one of 11 children in Margaret’s family.

The four elder bothers and her father served in World War 2 —three in the navy and two in the army.

The Bandy Scoles memorial match was first played in 1955 between Zingari and Port Chalmers.  Port Chalmers and Ravensbourne amalgamated at the end of 1991 to form the Harbour club.

"It’s an honour that the game has been played so long."

Port Chalmers is a closely knit community and, when he was growing up, Bruce Malcolm (81) was a friend of Bandy Scoles. They played rugby and rowed together.

When Margaret and Bruce were married two years later, it was a union of two keen sports families. The couple have left their mark on the Otago and New Zealand sports landscape in the past 60 years.

Their deeds have been recognised at higher levels. Bruce received the MBE in 1995 and Margaret the ONZM in 2003.

Margaret, the youngest sibling in her family, represented Otago at cricket and basketball in her youth and at bowls when she got older.

She played basketball for Otago with former New Zealand netball coach Lois Muir in the 1950s and won 11 Bowls Dunedin titles and was runner-up in the New Zealand fours in 2004.

But her crowning achievement in sport was as a bowls administrator.

Margaret was a member of the Otago Women’s Bowling Association executive from 1985 to 2001 and filled the same role after the amalgamations with Bowls Dunedin until 2012. She was appointed patron of Bowls Dunedin this year.

She did not support the amalgamation of men’s and women’s bowls in Dunedin in 2001.

"It was not a good thing. Women’s bowls has gone back since then," she said.

"The pavilion at Logan Park was a meeting place for the ladies. We seldom get together now."

The pavilion, funded by the women, was debt-free when it was opened by Dunedin mayor Cliff Skeggs in 1986.

"We funded it by selling small raffles each week. But the men had the majority on the Dunedin centre and didn’t want it."

The Malcolms celebrated their 60th wedding anniversary this year. They have five children, 11 grandchildren and 10 great-grandchildren.

"We are a very tight-knit family," Bruce said.

"We both love sport."

He was recognised as a hard negotiator.

"We had to make sure that the worker got a reasonable share of the profits and a fair living wage," he said.

He used his negotiating ability on the management committee of the Otago Rugby Football Union and as a national bowls selector.

In his heyday, Bruce was known as the unofficial mayor of Port Chalmers.

"At one stage people reckoned I was in every organisation at Port except the Plunket Mothers," he quipped.

He was given the nickname "The Mirror".

"When they asked me questions at stop-work meetings I used to say I would look into it."

Bruce was also a long-term blood donor and has donated 101 pints.

Bruce narrowly missed selection for the Commonwealth Games in 1954 but extra fitness training made the difference for the Queens Drive crew two years later.

"We were as fit as trout and would run to Dunedin and get the train home or else get the train to town and run back," Malcolm said.

The crew for the Melbourne Olympics was announced after the national championships and national trials at Picton in 1956.

Malcolm, an apprentice at Hillside, was working on a boiler when he received news of his selection in the rowing eight.

He worked at the Otahuhu workshops when the New Zealand crew trained at Auckland for four months.

It was heartbreaking for Malcolm and the other members of the rowing eight when the New Zealand Olympic Games selectors rejected the nomination.

"Rowing officials protested and the crew carried on training for another couple of weeks," Malcolm said.

Bruce became emotional when he recalled the incident.

"It was a big disappointment. It was bloody terrible. I never got over that."

Bruce started bowls at the Port Chalmers Club in 1970 and has won 12 Bowls Dunedin titles. But his highlight was to win the national pairs title with Gordon Duggie in Christchurch in 1990 when they beat Stan Lawson and his son Gary 18-13.

"At one time they led 12-3 but we reached 17 before they scored again. It was a great thrill."

Bruce was a New Zealand men’s bowls selector for 11 years from 1998 to 2008. The highlight came at the 2008 World Bowls in Christchurch when Gary Lawson and Russell Meyer won two gold medals and the men’s team won the Leonard Trophy teams title for the first time.

"Gary and Russell weren’t liked by a lot of people. But I was determined to get them in the team because I couldn’t see us going anywhere without them.

"Russell gave people the impression that he was lazy and Gary could get very loud and demonstrate a lot.

"But Gary always behaved in any team that I was around. Gary’s been a scallywag all his life but you have to know how to handle and talk to him."

When he became a selector, former New Zealand international Bob McDonald told Bruce never to watch bowls from behind the players.

"He told me to watch them from the side because you can see if they get nervous under pressure.

"If that happens, forget them."

Bruce did not like potential international players wasting a bowl.

"I have seen it in the Trans Tasman and at World Bowls. The third bowl is usually wasted. It’s a habit bowlers have developed. Percentage-wise, it’s ridiculous."

Bruce was a utility forward and played his first senior rugby game for Port Chalmers in 1953 and has been a loyal club member ever since. He played five years of premier rugby but made more of a mark as an administrator.

He was on the NZRFU Junior Advisory Board for 10 years, on the management committee of the Otago Rugby Football Union from 1974 to 1989 and was ORFU president in 1988.