Mason out to continue good form 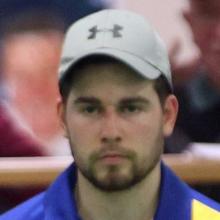 Elliot Mason
Elliot Mason's rich vein of form is expected to continue in this weekend's PBA competition at the Dunedin Lawn Bowls Stadium.

Last month, he won the regional qualifying round of the Scottish Singles, which catapulted him from sixth to third-equal in the national rankings with Craig De Faria (Taranaki), and poised to topple the Southland pair of Craig Merrilees and Craig Tinker.

A strong showing this weekend and successful defence of the World Indoor Singles title would only enhance his growing reputation.

Although a member of the Forbury Park Club, Mason has also aligned himself also with the Gore club, in order to seek top competition alongside long-time friends and Bowls New Zealand development squad members Sheldon Bagrie-Howley and Caleb Hope in the Southland Intercentre team.

Mason teamed up with Bagrie-Howley to win the Kittyhawk under-30 tournament last weekend, but this weekend teams up with Hope to contest the World Indoor Pairs Dunedin regional qualifying round.

Mason will start in the singles at 6pm tonight and and the two have drawn a first-round start to the pairs at 8.30am on Sunday.

Newly crowned national champion of champion fours champions Beth Brown and Dale Bourke are destined to go head to head in the second round also, should first-round matches go to form.

All World Indoor Singles qualifying matches are expected to conclude late tomorrow night at the semifinal stage. The semifinals and final are set down for August 17.

Last year's regional and national champions Mario Sopp (Brighton) and Helen Carman (Taieri) have opted for different partners this year, Sopp teaming up with Lance Ibbotson and Carman teaming up with Bruce McDowell.