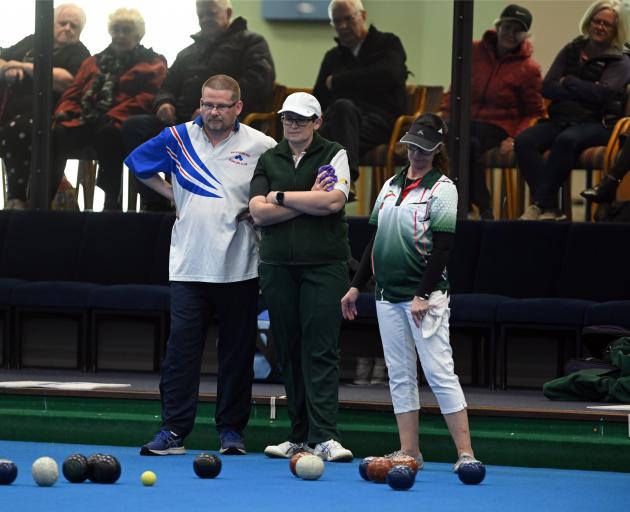 (from left) Regan Larkin and Sarah Ibbotson, and playing partner Tania Beattie, watch Andy McLean. Photos: Linda Robertson
As many will know all too well, sport can be a cruel companion, and last night's Bowls Dunedin mixed pairs final was a prime example.

In a match of changing fortunes, the composite pair of Regan Larkin (Andersons Bay) and Sarah Ibbotson (Green Island) snatched victory from what appeared to be the jaws of defeat with four superb final ends in which they scored 13 unanswered shots. 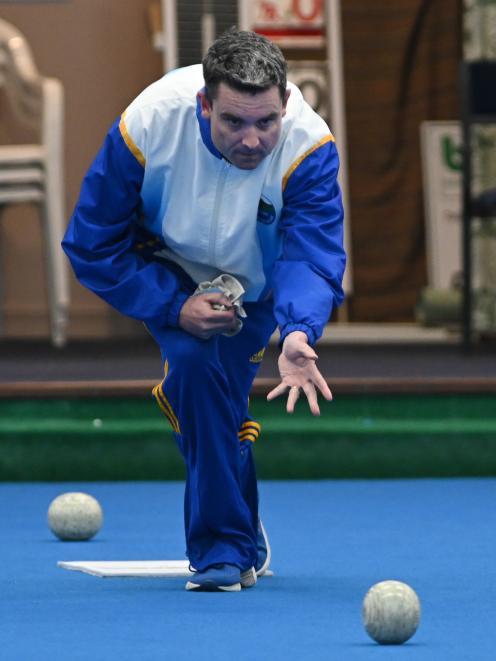 Andy McLean delivers a bowl at the final of mixed pairs bowling competition at the Dunedin Lawn Bowls Stadium last night
Such was the pressure they put on their opponents Andy McLean (Taieri) and Tania Beattie (Fairfield) that McLean conceded defeat with two ends of the 16-end final to play, and Larkin and Ibbotson holding a 19-11 advantage.

After notching up a series of impressive victories over some top opponents, McLean and Beattie wore the favouritism tag, and after jumping out to a six-shot lead after the first two ends, still looked odds on for the title.

But the sport of bowls can be a great leveller, as was evidenced last night as Larkin and Ibbotson clawed their way back into the game to trail by just a shot at 6-5 down after five ends.

McLean and Beattie then appeared as if they were back on a winning roll, shutting Larkin and Ibbotson out with some magical draw shots to hold an 11-6 lead at the end of 10 ends.

But then it all went wrong for McLean and Beattie.

Ibbotson all of a sudden found an ability to draw in on the head. With McLean and Beattie holding two shots on a crowded head, Ibbotson somehow found the gap with a bowl that pierced through the narrowest of gaps and nudged two of her opponents' two shot bowls out of the way to draw four, and turn the game.

On the next end Larkin and Ibbotson scored five, again on a crowded head, then on the 13th end they scored three more, followed by a single on the 14th, for an unassailable 19-11 lead.

For Larkin, a former Bowls Dunedin representative, the first Bowls Dunedin title for the 2019/20 summer became his sixth centre title, while for Ibbotson, a Bowls Dunedin development player, it was her first.