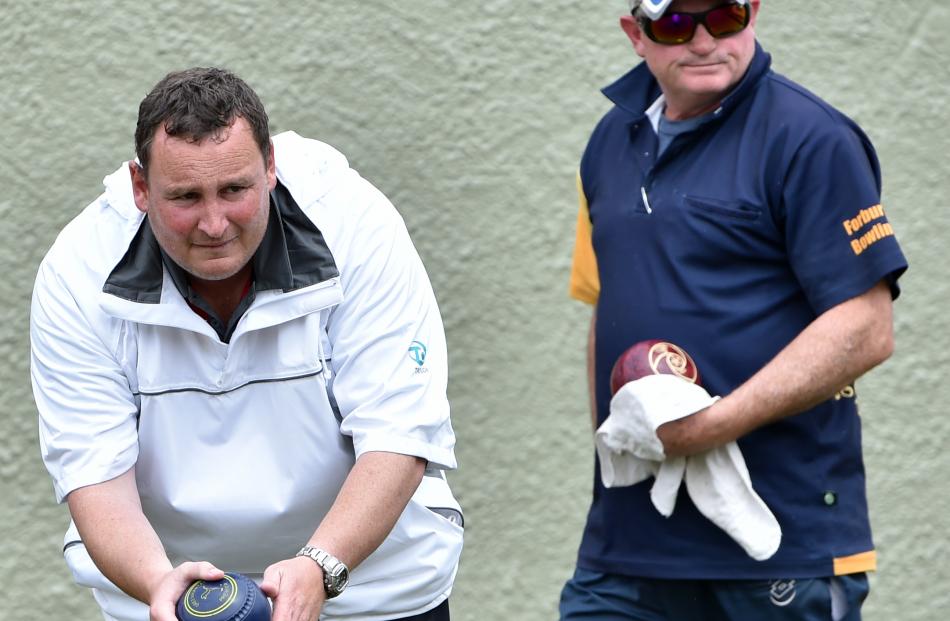 Graeme Hislop (left, South Otago), watched by Rodney Fleming (Forbury Park), prepares to play a bowl during the final of the Festival Fours in Dunedin yesterday. Hislop was a key figure in South Otago’s win. Photos by Peter McIntosh. 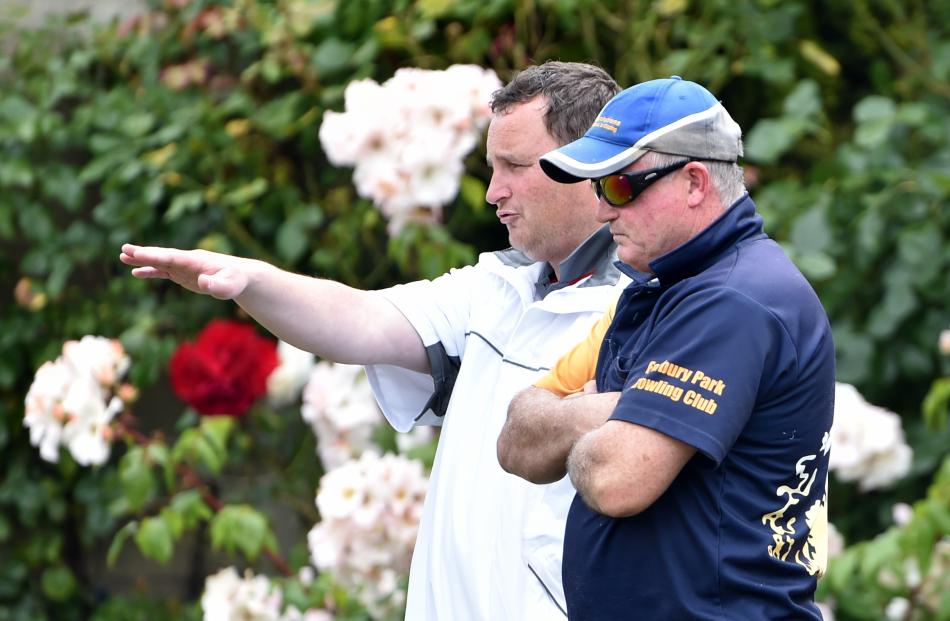 Hislop and Fleming contemplate the state of play.

Skip Graeme Hislop was the ice man. He was cool under pressure and played eight key shots when South Otago won the 61st annual Festival Fours in Dunedin yesterday.

The South Otago team finished runner-up last year but Hislop made certain that the event was won this year.

Hislop (40), a machine operator from Kaitangata, has been playing bowls for 26 years and has won 19 South Otago titles. He has represented the centre for more than 20 years.

But he has never dominated a game like this when playing in Dunedin.

He took command from the start by driving the jack into the ditch on the first end when his team was four shots down on the head.

His ice-cold temperament counted when he played match-winning shots with his final bowl on the last two ends.

The scores were locked at 8-all after 10 of the 12 ends and the Forbury Park team had the shot on the head before Hislop played his last bowl.

Forbury Park lead Bracegirdle's bowl nestled alongside the jack on a crowded head when Hislop drew the shot around behind the shot bowl on the 11th end.

''I did not expect to get it and would have been happy to just go one down,'' Hislop admitted.

On the final end Forbury Park again had the shot after skip Fleming pushed the jack into the ditch. This time Hislop's long draw stopped at the edge of the ditch and his team members threw their arms into the air in admiration.

South Otago held a slender 5-4 lead after six of the 12 ends but Hislop was in superb touch and played key shots with his last bowl on the next three ends to give his team an 8-4 lead with just three ends left.

But on the 10th end Bracegirdle and West drew accurately and Forbury Park collected four shots and the scores were level.

The other key player for South Otago was Wynette McLachlan with her accurate draw bowls. She has won 33 South Otago titles.

The best Forbury Park bowlers were Bracegirdle, who dominated the lead bowls, and West, who was accurate on the draw.

It was the first time in the 61 years of the Festival Fours that three women had played in the final. It was the second year in a row for Wynette McLachlan while half the Forbury Park team were female.

Heavy rain throughout the morning restricted the quarterfinals and semifinals to eight ends.

But the ground staff on the Kaikorai green did a good job of sweeping off the water and final was played in dry conditions.

Th event was first held in 1955, by the Kaituna Bowling Club, as part of Dunedin's Festival Week and has been organised by the Kaikorai club since 2005, after Kaituna went into recess.