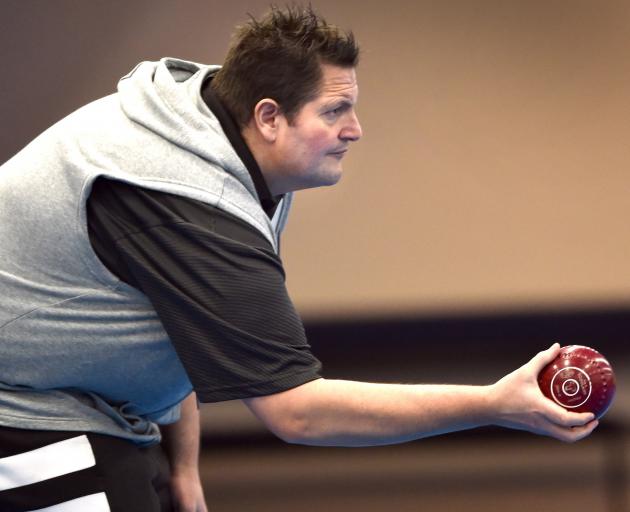 Bowler Marty Kreft is all concentration as he gets ready to deliver a bowl at the Shanghai Singles PBA event at the Dunedin Bowls stadium on Sunday. PHOTO: PETER MCINTOSH
Competitive bowls made its return from a pandemic-imposed hibernation over the weekend.

The PBA Shanghai Singles took place at the Dunedin Bowls stadium on Sunday and a maximum field of 48 bowlers turned out.

The bowlers played in the points style which allows three players to play in a match, with each having a maximum of three bowls per end. The winning bowler is the first to 31 points. Six points are awarded from each end with three points for first, two points for second and three for third.

The event was to have been played on Queen’s Birthday weekend but was postponed because of Covid-19 restrictions.

The final featured Dunedin bowlers Andy McLean and Joko Susilo, and Sandy McNoe, of Milton. Mclean had just squeezed home in his semifinal, winning over Marty Kreft and Susilo, who both scored 30 points to McLean’s 31 points.

The final was easier for McLean who reached the 31 point limit, well ahead of McNoe, who had 19, while Susilo was well back with nine points.

McLean would get to compete in the national finals in Auckland in September with the chance to win a trip to Australia and compete in an international event.

There will be more PBA events in the next few weeks as it gets its winter season fully up and running.