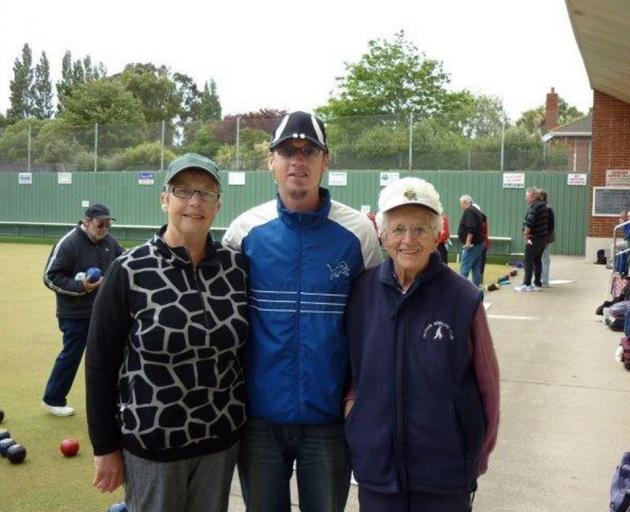 ''It was the first time we had played together as a family.

''I loved every minute of it. I would love to play with them again.''

Mary started bowls in 1980 and has won six Bowls Dunedin titles. She plays for the Outram club and represented the Dunedin centre for 20 years.

Lynne Seddon (62) has been playing bowls for only four years and is a member of the Green Island club. She is also a member of the Taieri Golf Club and played cricket for Otago in her youth.

Gareth, who fits double-glaze windows for Thermawood, wanted to play with his grandmother before she became too old to play the sport.

''I felt overwhelmed. It was an honour to be able to play with Nana and Mum,'' he said.

''We had an awesome time. We were there to have a fun day. It was a bonus to win the tournament.''

The family team won the tournament by two points from another composite team. They had no special secret.

''There was a rapport between us and we just relaxed and enjoyed the day,'' Mary said.

Gareth said: ''We had a good team spirit, everyone was on form and we worked with and for each other.''

In her heyday, Mary was one of the best women bowlers in Dunedin.

Mary played golf for 12 years and switched to bowls at the age of 55. She comes from a noted New Zealand sporting family: her father, Albie Jelley, the local barber when she was growing up in Mornington, was an international cricket umpire.

Her three brothers Charlie, Stan and Arch were talented runners.

Arch is better known as the coach of John Walker, who won the Olympic 1500m gold medal at Montreal in 1976 and was the first runner to break the 3min 50sec barrier for the mile.

Arch, now a keen bowler and bridge player, has been a mentor for his great-niece Rebecca Jelley, who played for North East Valley when she studied in Dunedin.

She now plays in Auckland and reached post-section in the singles at this year's national championships in New Plymouth.