Bruce Beath, of Andersons Bay, in action during the match between Mornington and Andersons Bay at Mornington Bowling Club earlier this month. Photo: Linda Robertson.
It is tight at the top of South Otago women’s bowls. Three bowlers are competing for the top spot.

Eileen Grant (Clutha Valley) tops the table with a record 35 titles and is followed closely by Wynette McLachlan (Clinton) on 34 and Christine King (Balclutha) on 33.

King, a retired chemist, followed her parents to the bowling green when she was growing up in Lawrence. Alma and Walter Webster were stalwarts of the local club and gave their daughter an early love for the game. 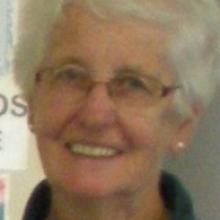 Ruth Grant.
She started playing bowls in 1982 and won her first South Otago title in the champion of champions singles in 1985, when she was living in Lawrence.

King, the form bowler in South Otago this season, won the open singles and open pairs with clubmate Mary Collett.

"I’m very competitive but still go out to enjoy the day," King said.

"Winning is a bonus for me.

"These days I have more pleasure in helping other bowlers to win a title. It’s great to see them enjoy the moment."

The strength of zone 6 women’s bowls will be tested by the women’s 10s at Balclutha at the weekend.

The Balclutha pair of Bob McAuley and Blair Thomson have teamed together to win two South Otago titles this season.

They beat Milton’s Adam Wyber and Destry Pepper 24-10 to win the open pairs and also won the open fours with John Sutherland and Brian Dodds.

It was the 16th centre title for McAuley, the 11th for Thomson, the ninth for Dodds and the eighth for Sutherland.

Robert Wilson won his 26th South Otago title in the mixed pairs with Jane Wintringham when they beat Bruce Campbell and Sylvie Melvin 27-12. It was the third title for Wintringham.

Graeme Hislop won his 20th title and a third bar to his gold star when his Kaitangata team beat Milton (Gerry Wyber skip) 14-12. It was the 13th title for Bruce Littlejohn and eighth for Neville Twaddle.

Former Rugby News editor Bob Howitt, who these days lives in Arrowtown, has profiled Muir’s rise as follows: "Conor Muir’s victory in the Central Otago singles may have ranked as an upset but astute judges in Dunedin and Central Otago had been predicting big things for Muir for some time.

"He competed in under-20 singles events at the tender age of 14 and was in the national development squad at 16 when he came under the guidance of Dunedin bowls guru Terry Scott.

"A member of the powerful Clyde club, Muir (23) had not won a senior centre title before this season.

"But in the space of three weeks, as the Clyde club ran red hot, he claimed two titles.

"The first was with Howard O’Donnell and John Carvell in the centre triples when they beat  clubmates Alistair Watson, Ken McConnell and Russell Laing 23-12. Muir was still on cloud nine from that success when he turned up for the singles championship.

"I backed myself to win three of my four matches on day one and qualify," he said.

"That achieved, I decided to give every match on the second day my best go.

"In a remarkable sequence of events, he proceeded to knock off his Clyde clubmates one at a time until the title was his.

"His first victim was Alistair Watson.

"That was a huge thrill to defeat Swoop — he’s really tough to beat.

"He then knocked over Neville Kemp 21-12 in the quarterfinals and Howard O’Donnell (the singles player in the Central Otago rep team) 21-10 in the semifinals.

"That pitted him against the experienced Trevor Drake (Alexandra) in the final.

"I was thrilled just making the final, but decided to just keep playing my accurate draw game and it paid off."

Muir won the final 21-13 and was selected in the Central Otago pairs for the national inter-centre sevens in Wellington next month.

He was born in the UK and came to New Zealand aged 16 months. He was educated at Alexandra Primary and Dunstan High School.

He works as a civil engineer and plays rugby as an outside back for Clyde-Earnscleugh, which was third in the premier competition last year."=

Ruth Grant, the hardest-working bowls administrator in Central Otago, skipped the Alexandra triples team to win her 17th Central Otago title. It was the 16th for Alma Crosbie and third for Elaine Cushnie.

Grant’s Alexandra team won the Central Otago women’s interclub title and will compete in the national final in Auckland in March.

Grant has been Central Otago Bowls centre manager since 2004.

Scott then represented North East Valley and beat Wayne Hewitt (Fairfield) 21-14 in the champion of champion’s singles to win his 11th Dunedin title.

He won the open pairs with Elliot Mason when they beat Reece Aitken and Kris Newall (Fairfield) 23-11. It was the first title for Mason.

It was the second title for Fleming and sixth for Wilson.

Jean Young won her fifth title and gold star in the open triples with Taieri teammates Beth Brown and Judy Robertson. They beat  clubmates Janet Swallow, Barbara Archer, Shona Morrison (Taieri) 15-8 in the final. It was the 11th title for Brown and the seventh for Robertson.

Graeme Sangster (Meadowbank) won his fourth North Otago title and remained unbeaten in the two-life singles. He clinched the title when he beat the remaining one-lifer, David Poole, 21-18.

In the women’s champion of champions pairs final, the Meadowbank pair of Barbara Allan and Carol Read beat Brenda Hope and Marie Guthrie (Phoenix) 22-16. It was the seventh title for Allan and the sixth for Read.