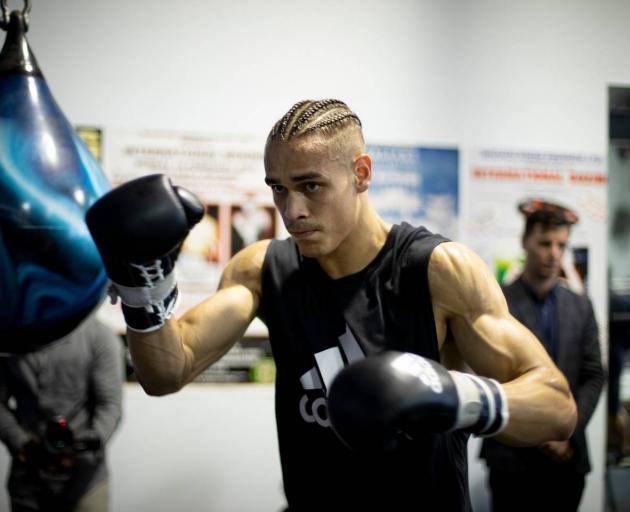 David Nyika at training. Photo: Dean Purcell / NZ Herald
Kiwi amateur boxing star David Nyika could find himself making his professional debut in December on the undercard of Joseph Parker's clash against Junior Fa – if a number of necessary parties can come to an agreement.

The two-time Commonwealth Games gold medallist has joined Parker's camp for the December 12 fight in association with Stonewood Homes, and has expressed an interest in joining the professional ranks.

However, the 25-year-old is not willing to risk his spot at next year's Olympic Games to do so.

Both the Commonwealth and Olympic Games have historically been amateur-only events; however, the rules were changed ahead of the 2016 Olympics in Brazil to allow professionals to compete.

With the Olympics in Japan delayed a year, there is hope that Nyika might be able to make his professional debut and still be eligible to compete in the Games.

"We're still working through the logistics of that," Nyika said. "I think anyone would like to fight on this card; it's going to be a massive show. Just the prospect of that is exciting.

"But [the Olympics] is my number one goal at the moment. It's been 11 years in the making so I'm still making a beeline for the Olympics."

Australian Justis Huni was in a similar position, and made his professional debut last month with an impressive seventh-round stoppage of Faiga Opelu to claim the Australian heavyweight title.

Under Boxing Australia's rules, athletes who have qualified for the Olympic Games can have up to 10 professional fights and still be eligible to compete at the Olympics.

Nyika said he hoped he could get in a similar position as he was ready to make the switch into the professional realm.

"Justis Huni put on a good display fighting 10 rounds for an Australian title in his pro debut and he's going to the Olympics as well. So, it's easily done, and it's going to be a really smooth transition especially getting this kind of experience.

"[Covid-19] definitely disrupted my pathway. I really wanted to be turning professional right after the Olympics. I don't really want to be hanging around the sport too long. It's a dangerous game so if I can be out in my early 30s, I'll be really happy. An early retirement, that's the plan."

Duco Events promoter David Higgins said they would love to have Nyika make his professional debut on the card but warned that parties such as Nyika's opponent and New Zealand amateur boxing have to be in agreement before anything can be confirmed.