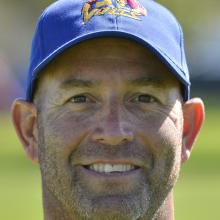 Rob Walter
Another gallant loss, and it hurts as much as the first.

Auckland got a tense two-wicket win at Eden Park Outer Oval yesterday thanks to a rapid 104 from Colin Munro and a clutch knock from Mark Chapman.

Last summer, Wellington emerged victorious after a wonderful rally by the Volts at the University of Otago Oval.

"When I look back on the game I’m just very, very proud of the way the guys kept fighting," Walter said.

"It would have been easy to let it go after that innings [from Munro] and lose by eight wickets. But they kept going and in the end we had a shot.

"Obviously, everybody wants to win a trophy and that is why you compete. But when I look at how we lost then I think we can be OK with that.

"It took a really special knock — or two in fact — for us to lose."

Opener Hamish Rutherford was forced to retire hurt on 36 after he was struck by a bouncer from Lockie Ferguson.

"Obviously he was not able to carry on in the game but he seems to have pulled up OK. Hopefully, it is nothing too serious."

That was key moment in the game. Rutherford was striking the ball crisply but his departure proved disruptive.

Nick Kelly was bowled shortly after and the Volts’ great start had unravelled.

"He had played beautifully up until that point. If he had carried on like that, who knows how the game would have ended up?

"But that was not to be and I just think the boys fought brilliantly after what was a very disrupted innings."

Dean Foxcroft also left the batting crease for a period after he collided with an Auckland player and sustained a heavy blow to the neck.

"I suppose we were 20 short in the end, but to be honest Colin Munro played out of his skin and that changed the way everything looked.

"We did well to get to 283 and in the field the guys battled hard."