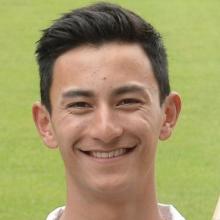 Max Chu
Otago has made one change for its round four Plunket Shield match against competition leader Canterbury, beginning in Alexandra tomorrow.

Gloveman Max Chu returns from a one-match break due to concussion.

Back-up gloveman Mitch Renwick drops out of the squad. He played the first two games as a specialist batsman but has paid the price for a lean run.

He made a pair in the opening match against Auckland and registered scores of 12 and 11 against a star-studded Northern Districts team which included test bowlers Neil Wagner, Tim Southee and Colin de Grandhomme.

He was only able to add seven with the bat in the win against Wellington last week.

Renwick might have retained his spot had it not been for the form of Dale Phillips.

Phillips was overlooked for the first two matches. But he remained firmly in the mind of the selectors and scored a timely century for Otago A.

When Chu was ruled out with concussion, Phillips was asked to come into the side and bat at No3, while Renwick dropped down the order and took the gloves.

Phillips batted beautifully. He top-scored with an aggressive knock of 65 in the first innings and compiled an impressive 83 not out in the second innings to help set up a declaration.

Had the forecast not been so bleak for the final day of the match at the Basin Reserve, it is likely Phillips would have been afforded the opportunity to chase his maiden first-class century.