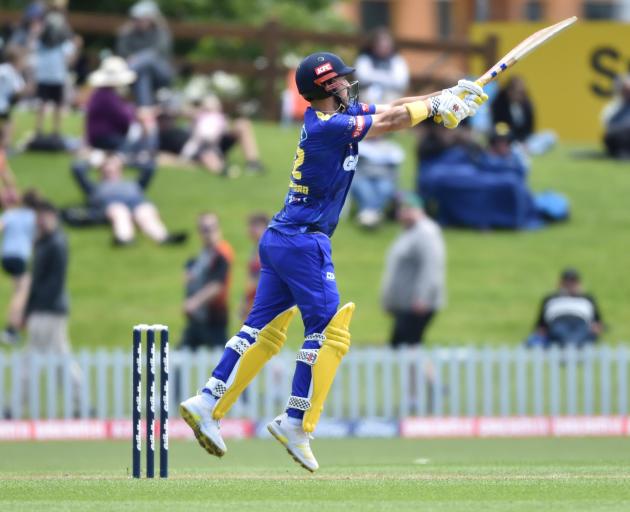 Otago batsman Hamish Rutherford smacks the ball for six to bring up his half-century against Central Districts in their twenty20 match at the University Oval yesterday. PHOTOS: GREGOR RICHARDSON
Chop, chop.

Dane Cleaver butchered the Otago attack in a devastating batting display at the University Oval yesterday.

The Central Stags keeper deserved a lot better than an awful pun. But then he did bring up his maiden twenty20 century off a delivery from Matt Bacon.

It was a streaky single too. He gave up early but the throw missed and he jogged through to bring up the milestone off 48 balls.

Otago had posted 184 for four in its Super Smash opener.

That should have been a competitive total. But Cleaver combined with red-ball specialist Greg Hay to put on a Central Districts record second-wicket stand of 156 from 89 balls and help clinch a five-wicket win with an over to spare.

The game might have changed but the basics have not.

He played proper cricket shots and added 56 from 46 in a solid supporting role.

The Volts picked up a flurry of late wickets. Bacon found himself chasing a hat-trick in the penultimate over.

But defeat had already congealed for the crowd of 300 or so.

The Stags needed only two runs from the last two overs and fittingly it was Cleaver who clipped the winning runs to finish unbeaten on 114.

Michael Rippon will not be sending Cleaver a Christmas card this year.

New cap Jake Gibson was expensive as well. He went for 11 an over.

The first half of the match actually went pretty well for the Volts.

Otago sprang a surprise and promoted Josh Finnie to open alongside Hamish Rutherford.

He has previously been asked to finish the innings, so it was a new role for him.

The 24-year-old right-hander got away three boundaries before he innovated with a lap shot and found the hands of Seth Rance at short third man.

But some of the disappointment disappeared with a flick of the wrists from Rutherford, who was playing his 100th T20 for the Volts.

He dispatched a delivery from Blair Tickner for a six and was in typically murderous form.

The 32-old left-hander is one of the more devastating openers in the format and had his side on track for a big power play.

He met a Ben Wheeler delivery partly down the track and lofted it over the long-off rope to bring up the team 50.

Spinner Jayden Lennox got similar treatment in the next over as the score continued to climb.

The Stags rallied with a couple of cheap overs. But, at 83 for one after 10 overs, the Volts were set to post a very decent total.

Rutherford clubbed another boundary to bring up his 50 from 32 balls. 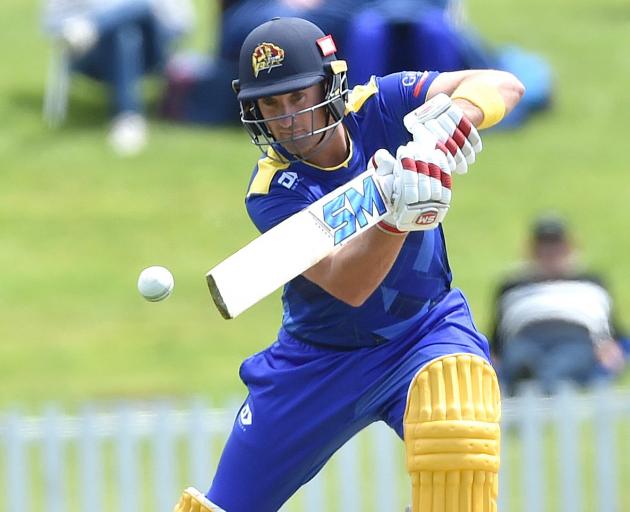 Neil Broom plays square of the wicket.
The Otago captain combined with veteran right-hander Neil Broom (30) to put on 84 for the second wicket.

But a century eluded him.

After reaching 82 Rutherford picked out a Tickner and fell short of the milestone.

Anaru Kitchen chipped in with a brisk cameo of 25 from 14 balls and Nick Kelly added 24 not out.

It might have been enough had Cleaver not been in such sharp form.

The Volts batted exceptionally well, and it required a superhuman display by Cleaver to sneak the Stags in. Promising start to the campaign for Otago - the bowling will improve. Uni Oval is a tough ground to defend.
Also great win for the Sparks. Starting to see some real depth and ability in the womens team. Keep up the hard work both teams!