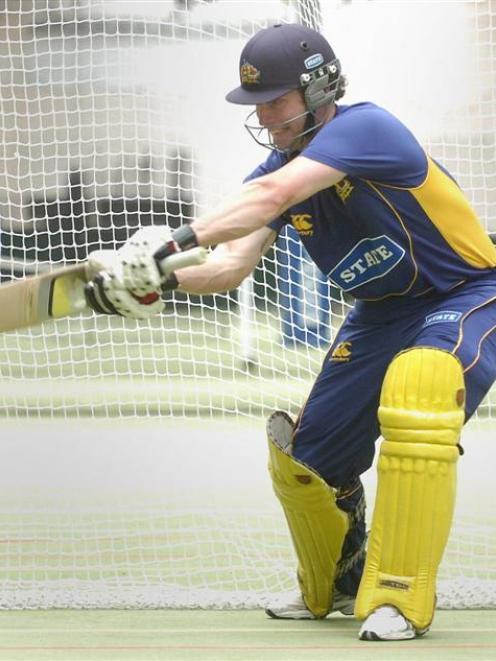 Haig has made a bright beginning to the summer.

Excellent form in club cricket and districts cricket saw him earn a spot in the Otago team ahead of the likes of contracted player Leighton Morgan, Green Island's Jordan Sheed and Taieri's Marcel McKenzie.

He has made the most of his opportunities, scoring 248 runs at an average of 41.33 in four State Championship matches this season.

In the last four-day fixture against Auckland, he scored his second first-class century to take his overall average to 38.56 from 11 matches.

His No 5 spot in the Otago four-day side seems secure for now but in one-day cricket Haig is yet to make an impact.

But despite the lean beginning, Haig is hopeful he can transfer his four-day form to the shorter version of the game. He will get that opportunity today when Otago plays Northern Districts at Molyneux Park in Alexandra.

"It is important that when you do get a chance you try and make the most of it," he said.

"It's fair to say my one-day record is pretty disappointing. It's that kind of game sometimes. I've tended to miss out and it hasn't gone my way to date, but hopefully things will click into place."

Haig got limited opportunities last season and took the winter off to reassess his goals.

The break has helped rejuvenate his career.

"It is nice to be back in the mix after not really being involved much last year. But, to be honest, I'm just trying to enjoy my cricket."

Haig likes getting on to the front foot and going after the bowling, a style that is well suited to the early stages of a limited-overs match when the fielding restrictions are still in place.

His other role in the side is as the backup keeper. He takes the gloves for Albion at club level but acknowledges his skills are well below that of Otago's two top keepers, Brendon McCullum and Derek de Boorder.

Otago has won the last four one-day games between the two sides and will go into the match as the favourite.

But Northern Districts has a well-balanced side with a quality attack and dangerous top five.

New Zealand swing bowler Tim Southee is on duty with the national side but the visitors can still draw from a deep pool including newcomer Trent Boult.

But with former Otago player Bradley Scott, Brent Arnel and Graeme Aldridge also in the 12, Boult may carry the drinks.

Otago's strength is in its all-round ability and sharp fielding.

Molyneux Park is a big ground and cutting twos to singles and threes to twos has helped Otago win games at the venue before.

England all-rounder Dimitri Mascarenhas will make his debut for the province and it will be South African-born swing bowler Neil Wagner's first outing in the coloured clothing for Otago.