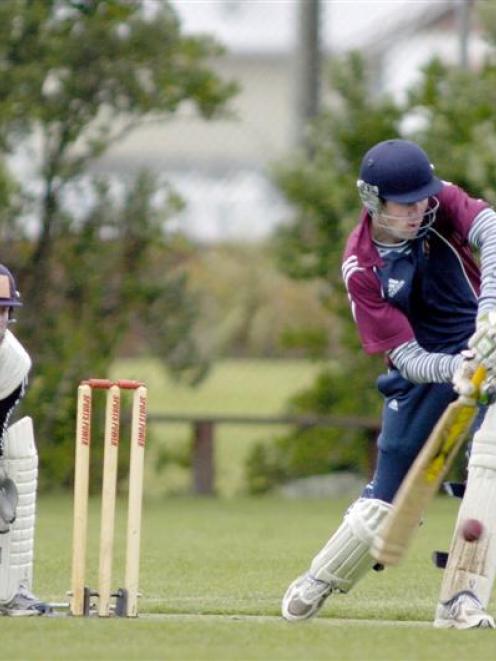 Taieri's Hayden Anderson was left stranded on 89 not out.

The right-hander has not scored a century for his club and had helped get his side into a strong position against Green Island at Sunnyvale.

When the weather closed in, Taieri was 180 for one from 37 overs.

Some lusty hitting from Otago rugby first five-eighth Chris Noakes and James Fuller helped Pelichet Bay reach 194 after being in trouble at five for 50.

Fuller, a former Auckland under-19 player smashed five sixes off Willie Brittian's only over, on his way to 71.

Noakes also found the boundary, whacking 11 fours and a six in his innings of 63.

Scott Hawkins was the pick of the bowlers, with four for 22 from 6.1 overs and Dave Webb took three for 17 from eight overs.

Carisbrook-Dunedin seemed to be heading towards a big total in its match with Albion.

With seven overs remaining, Carisbrook-Dunedin had reached 208 for six.

Mark Craig bowled tightly, taking one for 29 from 10 overs.

Otago wicketkeeper Derek de Boorder scored an undefeated 109 to guide North East Valley to 229 for four in its match with University-Grange.

Off-spinner Will Somerville proved difficult to get away, conceding just 19 runs from his 10-over spell and Craig Smith took three for 23 from 9.4 overs.

University-Grange was seven without loss when play was abandoned.