Cricket: Windies voice still telling it like it is 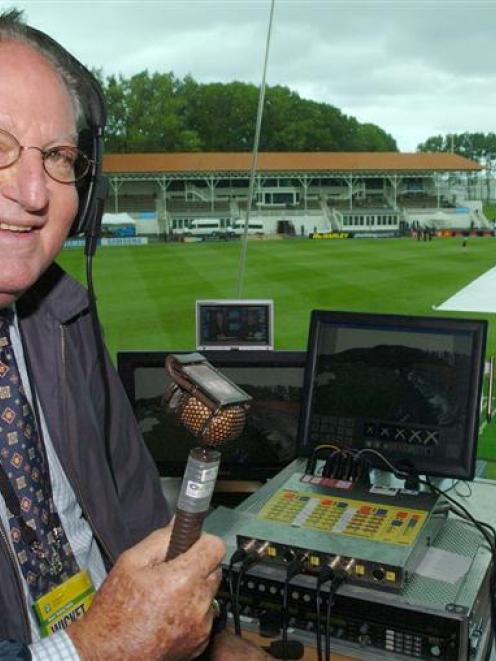 West Indies broadcaster Tony Cozier waits - in vain - for the weather to clear at the University Oval in Dunedin yesterday. Photo by Peter McIntosh.
Tony Cozier is at his best when he is talking about cricket. For more than 40 years the veteran broadcaster has been the voice of West Indies cricket.

His passion and professionalism has earned him a reputation as one of the best analysts in the game. He is unashamedly a fan of the West Indies but that has never stopped him telling it like it is when it has all fallen apart.

The 68-year-old, who is in Dunedin covering the first test between New Zealand and the West Indies, was at it again yesterday, telling the Otago Daily Times how disappointed he was with the tourists' performance.

"They don't have the confidence and that is a problem with where the West Indies are right now," he lamented.

"They should have come here against a team which has struggled in Australia [with confidence]. But they just laid back and didn't go at them. Unless that changes, I can't see the West Indies coming out of this tour with a positive result."

Cozier grew up in Barbados surrounded by cricket. His father, Jimmy Cozier, was a journalist. So cricket and journalism chose him.

He attended university in Ottawa, Canada, but until then had never left the Caribbean.

He wanted to "escape Barbados" and described the experience as "different".

"Between December and March there is nothing but ice and snow. It was an experience, but I've never been back."

He made his test broadcasting debut during the West Indies-Australia series in 1965 and quickly became a permanent part of the landscape. He is also a prolific writer.

In such a long career there has been many highs, too many to list.

The "outstanding West Indies teams in the '80s" stand out in his mind and watching great players like Garry Sobers, Brian Lara and Viv Richards emerge was a pleasure.

"In that length of time you get to see great players from different eras. Even now I still enjoy seeing new players coming through."

He has a soft spot for Sobers, whom he regards as the greatest player he has seen.

"I don't think there would be any question about that. Lara was a thrill to watch when he was going. He just gave you such enjoyment."

"He was a tremendous exponent of seam and swing bowling."

And who could forget the Windies four-pronged pace attack of Andy Roberts, Michael Holding, Joel Garner and Colin Croft?

Holding, Garner and Croft formed a formidable pace trio the last time the West Indies were in Dunedin for a test. The dramatic match was memorable for Holding kicking down the stumps after a caught behind appeal was turned down.

Somehow John Parker survived the appeal despite hanging his head and taking off his gloves.

Cozier did not come out to New Zealand for that tour but was listening to the broadcast flabbergasted.

"It was very controversial. We listened to it at home and could not understand what was going on, really. We couldn't comprehend how our team was so put out that they would [consider abandoning] a series. Of course we don't have that problem now."

These days, with the experimental rule that allows players to refer umpiring decisions to the third umpire, it is likely that call would have been reversed.

"If it [the technology] was around then you would not get the controversy that we had in 1980, which is still bitter in many people's minds."

Cozier last covered a test in Dunedin in 1969 and had his first look at the University Oval this week.

"It is the first time I've seen it and it is a lovely ground. When the sun was shining [Thursday] it was superb. It's a lovely tree-lined cricket ground."

Looking back on his career Cozier said it he could not specify just one particular highlight but acknowledged it had felt like he had never worked a day in his life.

Perhaps that is his highlight.