Duffy builds himself a new career 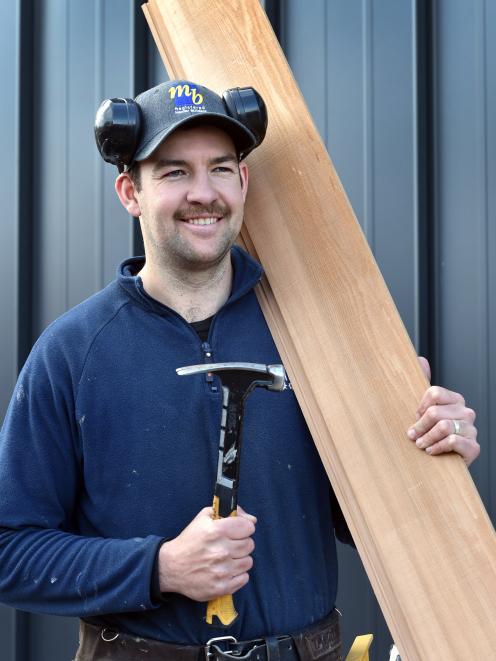 Former Otago cricketer Ryan Duffy has switched from willow bats to cedar weatherboards and will represent the region at the Registered Master Builders Apprentice of the Year national final in Auckland in November. PETER MCINTOSH
Ryan Duffy was crushed when he walked away from cricket. But the former Volts opener has reinventedhimself as a master builder. Cricket writer Adrian Seconi  reports.

Ryan Duffy had planned on hammering the bowlers.

These days the former Otago cricketer mostly sticks to hammering nails and he is really good at it.

He is off to Auckland in November to compete in the national final. There is nothing the 28-year-old cannot do with a hammer, a four-inch nail and length of four-by-two.

But then he has always been handy with a hunk of wood in his hands. A couple of years ago he had a very different career path mapped out.

He had a breakthrough season at the top of the Volts order in 2015-16. Duffy scored his maiden first-class century against a quality Central Districts attack which included Black Caps Doug Bracewell and Ajaz Patel.

A week earlier, he had defied the fiery Lockie Ferguson with a dogged 90 not out against Auckland.

Duffy seemed set to join younger brother Jacob Duffy as a permanent fixture in the side.

Life had other plans. Ferguson intervened.

The fast bowler was on the cusp of national selection at the start of the 2016-17 season and was bowling with frightening heat.

He collected a lot of lids that season. Batsmen were caught hovering, unsure whether to expect a missile directed at their toes or one at about eye level.

Duffy got the latter.

"Lockie Ferguson hit me in the head and that was the first year the new coaches Rob [Walter] and Anton [Roux] were there.

"They didn't really know who I was or what I was about. So that happened and it put me out for a good three months.

"When that finally came right I broke my hand in a warm-up game just before the last four-dayers of the season."

It was a crushing disappointment for Duffy. The following season he was overlooked for a playing contract.

Otago signed Rob Nicol instead and named him captain. Duffy's pathway back into the side was blocked.

Cricket was a huge part of his identity and to suddenly have it whipped away was unsettling. As he put it, he was "a bit dark about it".

"That was when I was like, 'well, what do I do now?' I was actually quite down about it. I had no idea what I wanted to do."

Duffy had some experience building. He had helped brother Matt Duffy with his building business in Central Otago and had teamed up with former Otago leg-spinner Rhys Phillips to do some odd building jobs during another off season.

"Building up in Central with my brother had been good. But I just didn't know if I wanted to do it [in Dunedin] with another company.

"A few months went by and I still didn't know what I was going to do and then I got a phone call out of the blue."

It was W Hamilton Building. They had heard Duffy was at a loose end and offered him an apprenticeship.

"Initially, I said no. My mind was gone. I didn't know what I wanted."

Duffy was not quite ready to let go of his cricketing dream.

"That season was just a real downer with injuries and missing out on a contract. I had a house and a mortgage - you've got to be real about it.

"So I kind of went cold turkey on cricket. It was time to move on. And my older brother was always in my ear telling me to get a real job.

"Now I reckon it is a blessing in disguise that that happened. I'm loving life now and really enjoying this."

Duffy took that job with W Hamilton Building and flourished. He completed his apprenticeship about three weeks ago.

Before that he was encouraged to enter the Southern Registered Master Builders Apprentice of the Year competition and won.

"As soon as I entered I went 'right, I want to win the nationals not just the regional competition'. I guess that competitive drive is still there.

"I talked to the judges after the final and they said that is what stood out about me - I was so driven."

But he is not playing club cricket. The weekends are his own, well, sort of.

He is training for the Coast to Coast and has entered the two-day event.

"I never thought I was that competitive but there is something in me that wants to do it."