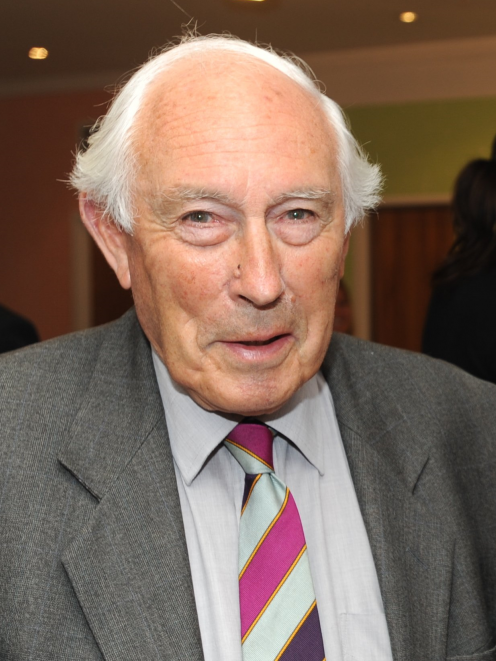 Iain Gallaway. Photo: ODT Files
A man who worked with Iain Gallaway in the last 10 years of the late broadcaster’s career said he was the consummate professional.

Gallaway, who was 98, died in Dunedin on Sunday.

He was acknowledged as one of the country’s greatest sports broadcasters and the voice of cricket in the South.

Dunedin man Steve Davie worked with Gallaway in the first 10 years of his career and what turned out to be the last 10 years of Gallaway’s broadcasting career.

Davie had high praise for his former colleague.

"He was just thoroughly professional. He just painted the whole scene so well.

"I grew up listening to him and then had the pleasure of working with him for 10 years," he said.

"Those 10 years that I spent working with him was the highlight of my broadcasting career.

"He had a beautiful command of the English language ... and as soon as you tuned in he would give you the score. It would always be there within 20 seconds of listening."

Davie said Gallaway just loved cricket and also rugby, and had commentated many games at Carisbrook. The duo shared the rugby commentating for one year when Davie first started out in the mid 1980s.

"Every day I would learn something from him.

"The best days at the cricket were when it rained. Then he would tell stories — just all the people he knew and the games he had seen and the anecdotes he could tell you. He just knew so many people and had so many stories."

Davie said Gallaway was an outstanding commentator and broadcaster and his type were unlikely to be seen again.

Gallaway had been a first-class cricketer and in 1947 played against the visiting MCC team. He also refereed first-class rugby, including two internationals: the British Lions taking on West Coast in 1950 and Australia playing Southland in 1949.

Allison said Gallaway loved Carisbrook and all the games played there. He was great at painting a picture of the game and had such a deep knowledge of it.