What do you do to celebrate? Well, you dress up like its 100 years ago and have a whack around in the gardens at Olveston Historic Home.

We can confirm there were sandwiches. Sadly, not cucumber but they were sufficiently dainty little things cut into triangles.

There were chocolate strawberries, delicious truffles and caramel corn as well.

And a game of cricket did break out on the lawn.

Cassidy was able to swing through the ball rather nicely, though.

Arguably nobody is more excited about the World Cup than Bates, who has waited her entire career to play an international in her home city of Dunedin.

The 34-year-old punishing right-hander has played more than 250 games for her country but none of them have been in Dunedin. 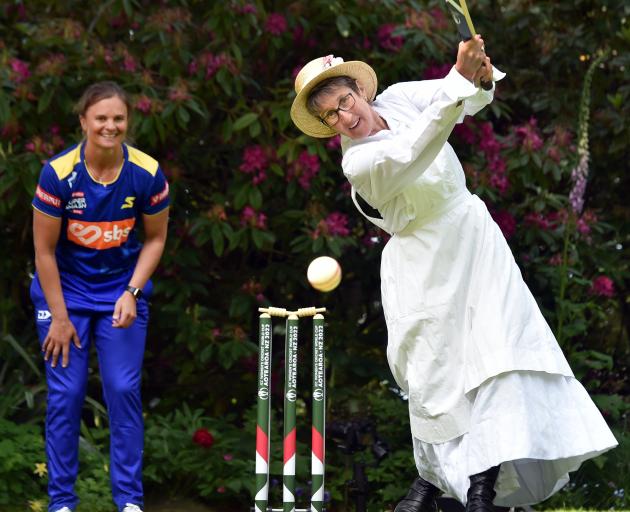 She has been denied by weather or injury but will get another opportunity next year.

The World Cup starts on March 4 and Dunedin is hosting three games.

‘‘It’s 100 days still which seems quite far away but I’m very excited to have this tournament in New Zealand,’’ she said.

‘‘After everything everyone has been through in the last couple of years, to have it at home and to be celebrating this is just super exciting.’’

It might be her last chance as well. She was sidelined with a shoulder injury last season but the chance to play in a home World Cup and the Commonwealth Games in July kept her motivated during a long rehabilitation.

She will reassess her cricketing future after that but ‘‘I’m just loving it at the moment, so I want to make the most of the end of my career’’.