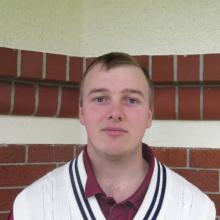 Fringe Otago batsman Llew Johnson just moved a lot further away from the margins with an astonishing knock at Memorial Park on Saturday.

The North East Valley opener blasted 21 sixes and 15 fours in an undefeated innings of 256 against University-Grange.

The 20-year-old right-hander’s effort has to be some kind of record, right?

Club cricket records can be sketchy so we welcome any correspondence on that.

But let us examine those numbers again. Twenty-one sixes adds up to 126 runs. And 15 fours was worth another 60 runs; so that is 186 runs in boundaries alone.

It is just extraordinary, really.

Johnson, who scored a century for Otago A recently and cannot be far away from a promotion to the Volts, had good support from fellow opener Will Kindley, who clubbed 46 in an opening stand of 107.

Most of the bowling figures are not too flattering but Sam Edlund took three for 51 and avoided the worst of the carnage.

University-Grange was 115 for seven when the rain arrived. Hunter Kindley nabbed three for 33 and his side recorded a 202 run victory by the Duckworth-Lewis-Stern method.

Carisbrook-Dunedin/Kaikorai had its nose in front when the rain arrived at Tonga Park.

It had posted 192 and Albion was reasonably placed at 96 for four in reply. But the Eagles were behind the Duckworth-Lewis-Stern equation and lost by eight runs.

Jordan Gain set a nice foundation for CDK with 51 from 50 balls.

Fergus Ellis (23 from 46) and Taine Bayly (33 from 39) knuckled down to add some some valuable runs in the middle order.

Albion used eight different bowlers and most of them were reasonably frugal.

Right-arm medium pacer Ben Blackman picked up the key wicket of Gain in his haul of three for 25, while Jesse Simpson claimed two for 24.

Former Otago contracted player Josh Tasman-Jones top-scored with 61 from 75. But he did not have much support from his team-mates.

Simpson limped to 18 from 53 balls as Albion struggled to get on top of the run rate.

Josh Finnie claimed the wickets of both players to finish with two for 11 from six overs.

Taieri was in the control tower at Brooklands but was undone by the weather rather than Green Island.

Cameron Jackson (54 from 81) compiled a patient half-century and spinner Ben Lockrose chipped in with 47 in the middle order to help their side post 247 for seven.

Nathan McNicol played a nice cameo as well. He whacked an undefeated 28 from 20 balls.

Mockford and Mockford were the pick of the Green Island bowlers. Jed took one for 28 from 10 and Jack two for 35 from 10, while former Otago seamer Christi Viljoen nabbed two for 48.

Geordie Scott showed his hand with 33 from 23 balls, and Gregor Croudis punched out 27 from 21.

But the Swamp Rats were three down and still had plenty of batting ahead when the rain arrived.