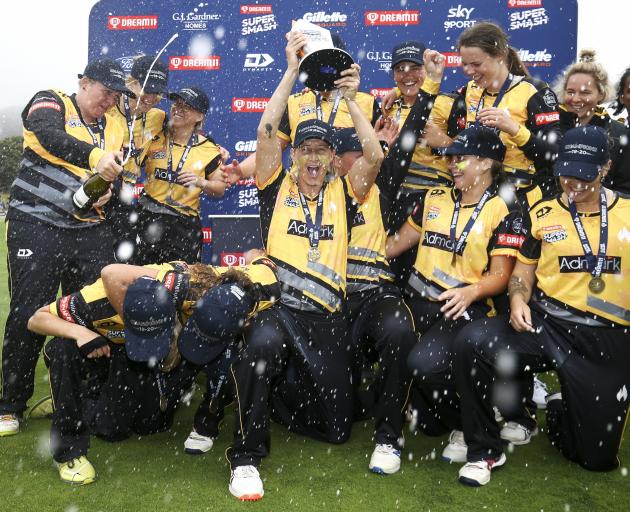 The Wellington Blaze celebrate winning the Super Smash last season. PHOTO GETTY IMAGES
The Super Smash gets under way today, when Wellington hosts Auckland in both the men’s and women’s tournaments. Cricket writer Adrian Seconi takes a wild guess at what the next six weeks might bring.

The four sides will renew their rivalry today in the opening round of the Super Smash.

The Wellington Blaze and Auckland Hearts will get the competition under way at the Basin Reserve this morning.

The Blaze were unbeatable last summer.

They strung together 10 consecutive wins during the round-robin phase and then beat Auckland by 36 runs in a rain-reduced seven-over contest in the final.

The Blaze will be without last year’s Super Smash player of the year Sophie Devine and White Ferns all-rounder Leigh Kasperek.

Kasperek is expected to re-join the Blaze for its New Year’s Day match against the Northern Spirit in Tauranga and Devine will return on January 9.

The Blaze will still be able to call on White Ferns duo Amelia Kerr and Maddy Green, while the Hearts can call on all four of its White Ferns — Lauren Down, Holly Huddleston, Katie Perkins and Anna Peterson.

Conway and all-rounder Jimmy Neesham will miss today’s match because of their involvement in the third T20 against Pakistan in Napier on Tuesday night.

But last season's leading wicket-taker Hamish Bennett and Logan van Beek both return after periods out with injury.

However, seamer Ollie Newton is still unavailable due to a lumbar stress fracture. He was outstanding last summer.

The Auckland Aces will start their campaign with some talent on the sideline.

Towering seamer Kyle Jamieson is with the test side, while Martin Guptill and Glenn Phillips are unavailable for round one.

Lockie Ferguson has a back complaint and Mark Chapman is also unavailable due to injury.

The Wellington teams are back in action on December 27. They travel to Napier to play the Central Districts Stags and Hinds.

The Stags narrowly missed a place in the playoffs last season. They will have a dangerous batting line-up which includes the likes of Tom Bruce, George Worker and a wounded Ross Taylor, when he eventually returns from test duty.

They also have the best spinner in the country — Ajaz Patel — even if he cannot get a run in the national team.

The Hinds have been in good form in the one-day tournament and will press hard for a spot in the playoffs.

Both Canterbury teams will be wanting to climb the competition standings after disappointing campaigns last summer.

They travel to Alexandra to play the Volts and the Sparks on December 29.

The Magicians struggled last season but have been in impressive one-day form. They have a quality top order which includes Kate Ebrahim, Frankie MacKay and Amy Satterthwaite.

They shape as a playoff contender, while the Kings have also been in good nick in white ball cricket.

They will be able to call on the likes of Tom Latham, Henry Nicholls, Matt Henry and Todd Astle. It is a handy line-up but there is some stiff competition.

The Northern Districts Knights and Spirit make a late start in the tournament. They travel to New Plymouth to play the Central Districts teams at Pukekura Park.

The Knights finished last in 2019-20, but no major association can call on as many talented players.

They are basically the Black Caps in pink when at full strength. And if they can get that full-strength team on the park it would be hard to see any other team winning the tournament.

The Spirit are likely to battle at the other end of the standings. They do not have the talent of the likes of the Blaze or the Hearts.

A preview for the Volts and Sparks will follow.

The Oil: Devon Conway has carried the batting for the past two seasons and will be a key wicket again. The Firebirds have a good seam attack as well.

The Oil: Can call on the likes of Martin Guptill and Glenn Phillips to generate a good strike rate, and towering seamer Kyle Jamieson will be a handful.

The Oil: Narrowly missed the playoffs in 2019-20. Spinner Ajaz Patel took 15 wickets last season and Black Caps veteran Ross Taylor will have a point to prove after he was dropped from the national T20 side.

The Oil: Canterbury lacks the star power of some of the top sides. But watch out for the likes of Ken McClure and Will William. They have had a very good Ford Trophy so far.

The Oil: The Knights will boast an international quality line-up once all the Black Caps filter back into the side.

The Oil: Unbeaten last season. Too much batting and bowling power for the other five sides. Lock in the title.

The Oil: Without star player Suzie Bates who is recovering from a shoulder injury. No imports either. The Sparks will really struggle.

The Oil: Been in good form during the one-day tournament and the Hinds boast a strong top order.

The Oil: All-rounder Brooke Halliday is averaging more than 50 in the one-day competition and has eight wickets. But the team will battle for the minor placings.

The Oil: Have been in a rebuilding phase but some of the younger players are starting to come through.