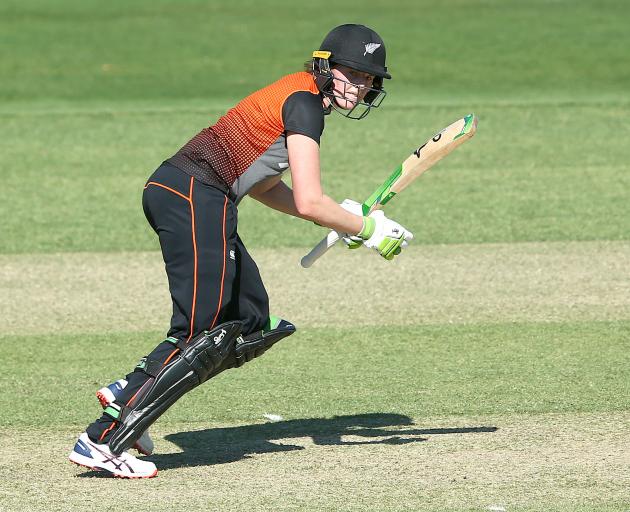 White Ferns vice-captain Amy Satterthwaite plays a shot during a practice match against Australia at Allan Border Field in Brisbane yesterday. PHOTO: GETTY IMAGES
We have all been waiting anxiously for international cricket to resume.

But some of us have more riding on it.

She is poised on 99 twenty20 appearances for New Zealand.

If selected, the 33-year-old will bring up the milestone game against Australia in Brisbane tomorrow.

Last year, Satterthwaite took a break from all forms of cricket to have her first child with wife and White Ferns team-mate Lea Tahuhu.

And she has been sitting on 99 since February 2019, when the White Ferns beat India by two runs in Hamilton.

That day, Satterthwaite clubbed 31 from 23 balls and is looking forward to reaching 100 games.

"I think it’s pretty special as it makes you reflect on your career and what’s gone before," she said.

"It’s really special to have Grace [her daughter] here and to be able to come back and play after giving birth — I’m really proud.

"There’s always those nerves and apprehension about how you’re going to go when you’ve been out of the game for a while. But I feel I’ve been hitting it well in the nets, so I’m ready to go."

Satterthwaite and Tahuhu are used to touring but the first-time parents have discovered a new set of challenges with Grace joining them on the trip.

"We’ve got a nanny on tour looking after Grace when we train, which has worked really well so far,” Satterthwaite said.

"We vetted the nanny pretty hard before she came in,” she added with tongue in cheek.

"She’s a local from Brisbane, so we had to make sure she wasn’t leaking info to the Aussie camp. But we’ve converted her into a Kiwi, I think.”