Ravindra stars as NZ A dominates with bat 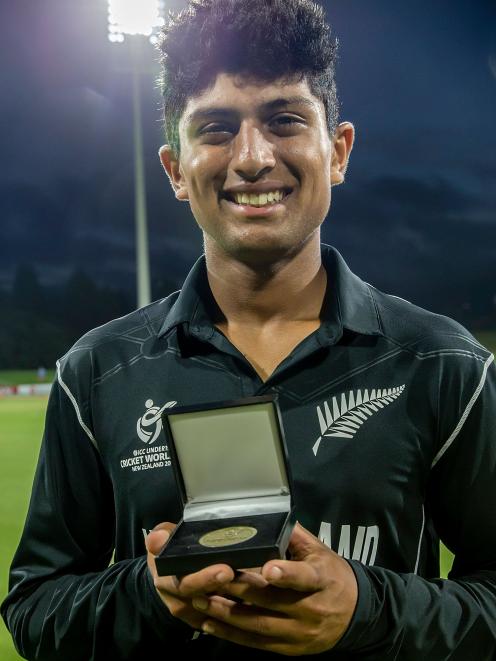 Rachin Ravindra. PHOTO: GETTY IMAGES
If the West Indies bowlers were after a good workout on the opening day of their tour of New Zealand then they received it.

New Zealand A dominated the opening day of the three-day game in Queenstown, posting 308 for three declared.

Wellington opener Rachin Ravindra led the way for the home side.

The 21-year-old left-hander compiled a patient 112 from 187 deliveries.

Test batsman Henry Nicholls also flourished with 76, while Joe Carter (41 no) and Devon Conway (46 no) were closing in on half-centuries when Canterbury's Cole McConchie made the decision to declare.

The only batsman not to fully cash in was Black Cap-in-waiting Will Young.

The Central Districts right-hander, who turns 28 tomorrow, was caught down the legside for 27. He had looked in fine touch before the error, though.

The West Indies will resume this morning on 17 for one.

Opener John Campbell (4) dragged a delivery from Blair Tickner on to his stumps.

Kemar Roach was arguably the pick of the West Indies bowlers. He went wicketless but was more frugal than the rest.

■ Otago A recorded a four-wicket win against Canterbury A in a one-dayer in Rangiora yesterday.

Tommy Clout took five for 26 to help dismiss the home side for a modest tally of 205, while former international Neil Broom anchored the chase with 87.

Otago A was pipped by two wickets in Thursday's game, though.

Henry Shipley made 78 from 80 deliveries to help Canterbury A overhaul Otago A's total of 240.

Llew Johnson stood out for the visiting side with a fine knock of 96.

Johnson scored a century for Otago A earlier in the season and two weeks ago scored an undefeated double-hundred in club cricket.