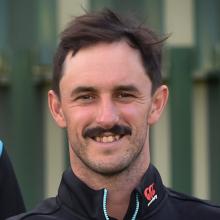 The 33-year-old left-hander is touring England with the Black Caps, but is unlikely to play in any of the three tests unless there is injury or Covid strikes the camp.

Rutherford has an impressive T20 record. He is closing in on 4000 career runs in the format and has scored those runs at a wonderful strike rate of 144.09.

Rutherford is set to replace Afghanistan batter Rahmanullah Gurbaz, who has IPL and international duties and it is unclear how much T20 cricket he will play for Leicestershire during the 2022 campaign.

Rutherford has played more than 150 T20s and is familiar with the Blast, having previously represented Essex, Worcestershire and Derbyshire.

He said he was delighted to join Leicestershire.

"I always enjoy playing county cricket and to be able to play another campaign is really exciting," he said.

"I know the club has a talented young squad and a proud T20 history, so hopefully I can put up some decent numbers and contribute to a successful campaign."

- The Black Caps’ warm-up game against Sussex at Hove finished in a draw yesterday after the fourth and final day was washed out.

The touring side made 342 for three declared and 40 for none in its second innings. Sussex was bowled out for 247.

They now head to Chelmsford for the second tour match against a Counties XI starting tomorrow.

Neil Wagner, Devon Conway, Daryl Mitchell, Kane Williamson and Tim Southee, who have been on IPL or fatherhood duties, will join the squad but their roles in the match are still to be determined.

Williamson and wife Sarah Raheem have just announced the birth of their second child.

Williamson posted a picture of the baby boy with his mother and sister Maggie on social media, writing: ``Welcome to the whanau little man!".

Congratulations Hamish!
Good reason for Volts fans to keep an eye on Leicestershire's games in the Vitality T20 Blast on Sparksport.