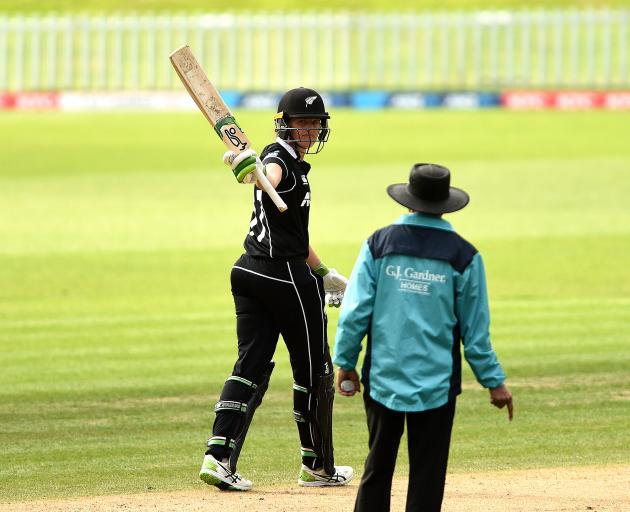 The 34-year-old stroked her seventh ODI hundred and combined in a New Zealand fourth-wicket record stand of 172 with Melie Kerr.

She also went past 4000 ODI runs during her undefeated knock of 119.

But there was one statistic she was thrilled about more than any other — the White Ferns’ one-game winning streak.

Pressure has been building on the side. It had slumped to 11 consecutive losses in the format.

Most of those losses came against the world champion England team and a classy Australia outfit.

But that offered very little comfort.

And after a lean series for the top order in the first two games of the three-match series against England, it was rewarding to eclipse the 220 England managed with seven wickets in hand and more than three overs to spare.

"We knew in our shed ... we could play a lot better than what we have been," Satterthwaite said.

"The most disappointing thing in a way is the way that we have been playing.

They certainly were yesterday.

But initially the home side struggled. The White Ferns slumped to 51 for three before Satterthwaite and Kerr guided the team to what was a comfortable win in the end.

She looked out of sorts to begin with.

"I had to guts it out early on. They bowled really well ... and we’ve seen that in all three games.

"Their new-ball bowlers have been exceptional, so we had to fight through that and knew that the longer we were out there the easier it would get."

She offered a return catch on 79 which should have been taken. But that is cricket and Satterthwaite finished with blazing shots and demonstrated some power not normally associated with her batting.

She took her career tally to 4067 runs. She is now three ahead of New Zealand great Debbie Hockley (4064) and joined both Hockley and Suzie Bates in the top 10 of all time leading scorers in one-day cricket.

India’s Mithali Dorai Raj is at the top of the list with 6888 runs.