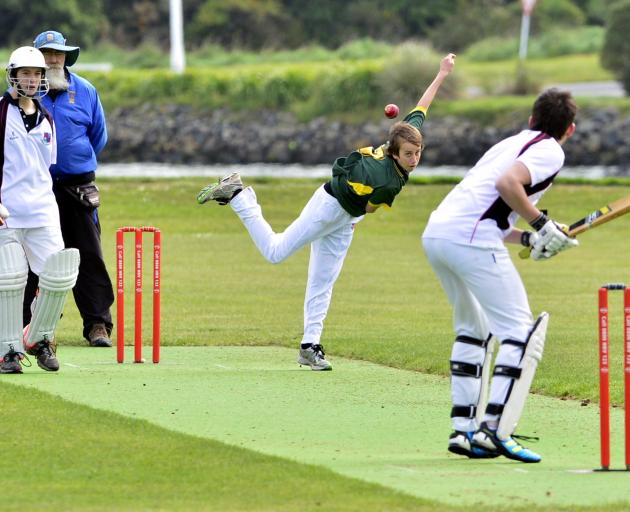 No stumps, no worries. You could always just chuck your school bag on the ground and imagine the rest.

There were so many school bags laying on the ground back in the mid-1980s.

Everybody was playing some sort of cricket game, usually with a taped-up tennis ball, some makeshift stumps and a loose idea of where the boundary was.

These days everyone is too busy tapping out a status update to tape up a tennis ball.

Cricket is barely hanging on to its position in the top 10 most popular sports at secondary school.

The sport has been withering at the roots for decades. New Zealand Cricket is well aware of the challenges.

It is constantly looking for ways to make the sport more appealing to the young. It is working on a youth cricket strategy, and Otago Cricket Association operations manager Tim O’Sullivan eagerly awaits the report.

But one of the more persistent ideas to be put forward throughout the years has been the suggestion the clubs are better placed to run the game at that level.

O’Sullivan is very much on the picket fence.

"It would come down to club capabilities," he responded.

"But the first thing that needs to change is in the heart of summer we need to have young people playing if they want to play.

"The clubs do pick up the keen or the better cricketers to fill up their second or third grade teams, so there is opportunity for perhaps the older ones.

"But if they are a year 9, 10, 11 for example, they generally have to wait until school cricket starts in early February."

School cricket finishes up before Christmas and does not resume until February, so it is a long break when you are trying to keep people engaged.

Secondary school is one of the points where the sport experiences a drop-off in participation.

Shifting responsibility for that level of cricket to the clubs could make a difference but not all clubs are equal, O’Sullivan said.

Some of the clubs do not have the resources to manage additional teams. To help with that, Otago Cricket is working on building coaching numbers in the hope that will make a tangible difference.

Otago Country Cricket chairman and long-serving Otago scorer Malcolm Jones is most definitely not on the fence.

Jones is convinced the schools need to relinquish control of the reins. His son attends Taieri College and while "everyone there does their best, the clubs have administrators, coaches, managers and you’ve got all the support in the world," Jones said.

"Then the kids walk out of that and go into school where there is no administration, very few coaches, no managers and pretty much no support, unless you are at one of the top schools like Kings, OBs and Johnnies, who have cricket programmes."

Jones believes that is a major reason why some children drop the sport.

"I was involved at Taieri junior club two or three years ago and they had 20-odd junior teams.

"But there [are] about 1100 students at Taieri College, and they struggle. Where do the kids go?"

The clubs run the junior game and pick up the baton again once people leave school. But the gap years are hurting the game, Jones said.

"Why would you take them out of an organisation that runs well and go and put them into somewhere that is ill-prepared to run the sport?"

Former Otago Boys’ High School teacher Ken Rust was the head of cricket at the school for more than 20 years until he retired midway through last year.

But you never retire from your passion, and Rust retains a keen interest in the sport at that level.

He is of the opinion schools should take a greater role in developing the game.

"My concern about clubs running it is their lack of personnel and infrastructure," Rust said.

"I know anecdotally through the clubs in town that they struggle to coach their senior teams, let alone second and third grade sides.

"So how or where would they get suitable personnel to run junior teams? I don’t know."

Rust agrees the missing six to eight weeks in the heart of summer is a problem. But it is an issue which is not easily solved.

"The reality is a lot of Dunedin kids do go away during the holidays, so it is not easy to organise regular cricket in that period."

The better players find slots with the clubs, but the rest miss out. Rust’s solution is for the clubs and schools to work more closely together.

He is also advocating for New Zealand Cricket to put resources into school cricket like New Zealand Rugby does.

Rust mounts a compelling argument. It dawned on him just how important secondary school structures are to sport while at an Auckland Tuatara game recently.

"Rugby, cricket, football, hockey and the likes are privileged because they have got this fantastic free support from secondary schools to keep their sport going.

"Baseball and any new sport [haven’t] got that, have they? And what a difference it would make to their growth if they did.

"If Auckland Grammar, Westlake, Kelston Boys all played baseball, the sport would be humming.

"New Zealand Cricket should fund schools who can pay for coaches if need be.

"All of a sudden there might be a pathway for young coaches to make their way if they knew their were jobs at schools."

Better coaches is something everyone can agree on.

And the best ones can measure their success by how many players return to play the game the following summer.