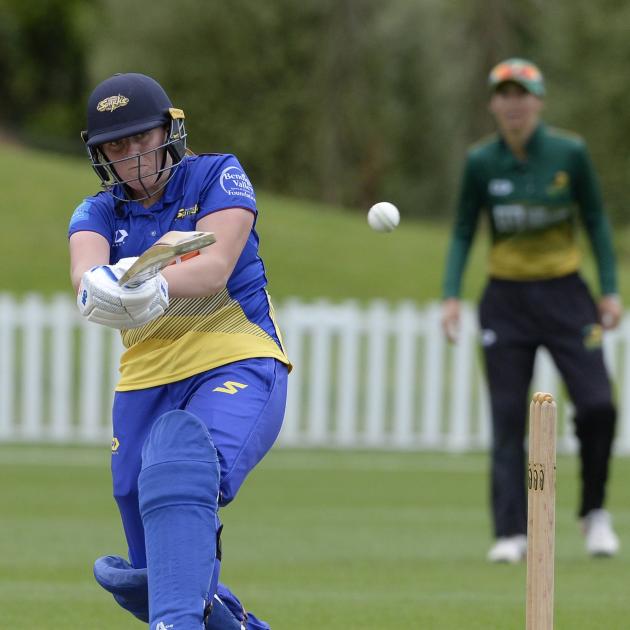 Otago Sparks captain Bella James smashes puts the ball through the legside during her side’s match against the Central Districts hinds at the University of Otago Oval yesterday. PHOTO: GREGOR RICHARDSON
The Otago Sparks have extended their losing streak in the Hallyburton Johnstone Shield to 17 games following back-to-back losses to Central Districts in Dunedin this weekend.

The Sparks have not registered a win in the tournament since their 39-run win against Northern Districts in Mosgiel in 2018-19.

Last summer, the team strung together nine consecutive defeats and it has lost all six games this season.

The team's lean run began with a couple of big losses to Central Districts at the back end of the 2018-19 season and the Hinds were once again too strong.

The visiting side recorded a four-wicket win at the University of Otago Oval yesterday after having marched to a comfortable nine-wicket win in a rain-affected game a day earlier.

CD wicketkeeper-batswoman Natalie Dodds stroked an unbeaten 50 and 108 not out in a superb effort over the two days.

Katey Martin's presence in the Sparks line-up lifted the side’s performance a notch.

The veteran right-hander blasted her sixth list A century and combined in a 101-run stand with Polly Inglis to help the Sparks post 231 for six from 45 overs yesterday.

But the Sparks can point to a poor start as a major contributing factor in the loss.

Both openers perished in the fourth over and there was further calamity when Caitlin Blakely was trapped lbw for 10.

Martin and Sparks captain Bella James (36) repaired some of the early damage with a patient 74-run partnership from 109 balls.

Martin survived a stumping opportunity on 46 and pressed on to her 50.

The hare overtook the tortoise at that point.

She unleashed a series of attacking strokes to give the run rate a much-needed boost.

Her second 50 had come off just 33 deliveries and had put Otago on a very different trajectory.

Martin holed out on 105 (104 balls) and Inglis departed following a sparkling knock of 53 from 45 deliveries.

But the day belonged to Dodds. She calmly went about her work.

She creamed a lovely on-drive to bring up her 10th list A century and move her side closer to victory.

Georgia Atkinson tonked a six to seal the win in the penultimate over.

On Saturday, the Sparks played well in patches but got clobbered when they let their standards drop.

Rain got heavier during the innings break and the visiting team was set a reduced target of 135 from 25 overs.

Jess Watkin smashed 33 not out from just nine deliveries.

Poor old Bhagya Herath got dispatched for three consecutive sixes during the brutal onslaught which sealed the nine-wicket win in style.

In the other games, Wellington beat Canterbury by eight-wickets at Hagley Oval on Saturday.

Canterbury bounced back with a 139-run win yesterday.