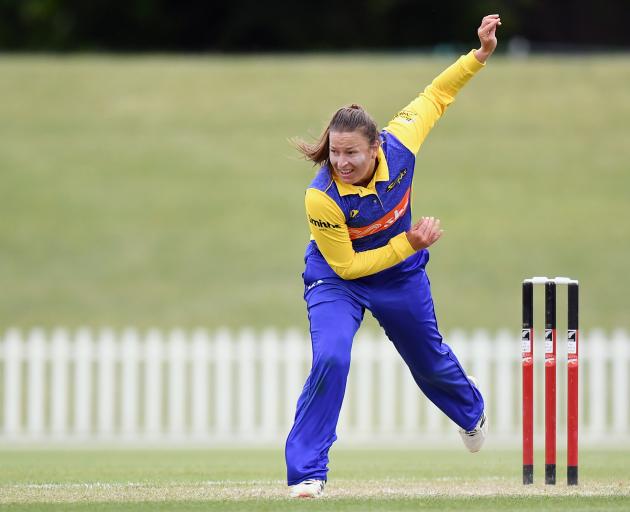 Hayley Jensen. Photo: Getty Images
The Otago Sparks will be missing White Ferns all-rounder Hayley Jensen for the next month.

"She is just taking a little break before she comes back and obviously she has a big summer ahead," he said.

New Zealand is hosting the Women’s World Cup next year, and on form Jensen is a certainty to make that squad.

She took three wickets in the penultimate over to help her side beat the Central Hinds by eight runs in the Sparks’ opening T20 match at the University Oval on Sunday.

Jensen has also been in good touch in the one-day competition. She has taken six wickets at an average of 18.66 and is averaging more than 40 with the bat.

Her absence will be sorely felt but the Sparks have more depth this season.

"Hayley is turning into a world-class all-rounder and is starting to understand her role better.

"She is probably the quickest bowler in the country at the moment and obviously a good hitter in that middle order.

"We will miss her but we’ve always said this team is about development and we have an opportunity to give someone else a run."

The Sparks have named two replacements in her absence. Batter Olivia Gain and all-rounder Saffron Wilson join the 13-strong side named for today’s T20 and tomorrow’s one-dayer against the Northern Brave at Seddon Park.

The Sparks lead the one-day competition standings and can take another step forward in securing a spot in the final with a win against the Brave.

The T20 tournament has just got under way but the Sparks showed promising glimpses in the narrow win against the Hinds.

Suzie Bates appears to have returned to form following a long break for injury, and wrist spinner Sophie Oldershaw bowled a tremendous spell. She snapped up three wickets for 16 runs from four overs.

The Otago Volts are also in action tonight.

They play the Northern Brave men at Seddon Park.

Top-order batter Nick Kelly is unavailable as he will not receive his second Covid-19 vaccination until December 10.

Once he has received his second shot, he will be available to take a full part in the remainder of the domestic season.

The Brave women have named a young squad as there are still several players yet to return from Auckland due to Covid-19 restrictions, including White Fern Brooke Halliday. Eimear Richardson is on international duty with Ireland.

The men will also have a new look squad for their first outing of the competition following the retirement of Anton Devcich and Dean Brownlie.

Jeet Raval will captain the side which includes Black Cap Colin de Grandhomme.