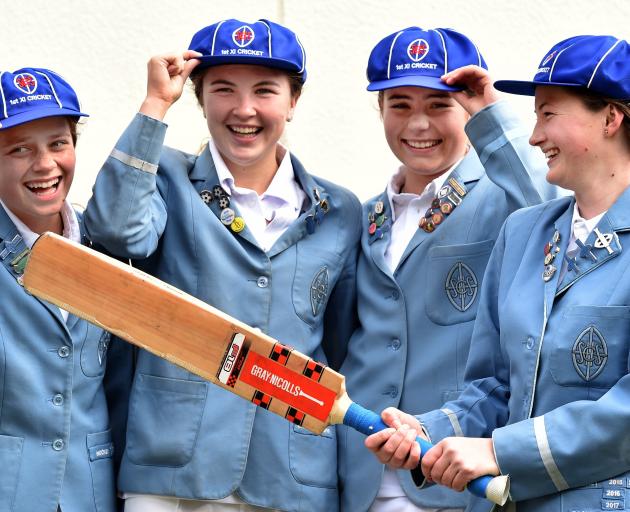 St Hilda's Collegiate and Otago Sparks foursome (from left) Eden Carson (18), Emma Black (18), Molly Loe (16) and Olivia Gain (17) look ahead to the season. Photo: Peter McIntosh
St Hilda's Collegiate will burst through a barrier with a historic appearance at the Willows Cricket Club next week.

The team is the first female side to be invited to play at the club.

Neil Rosenberg, who has coached the school's first XI for more than 20 years, reckons it is another sign female cricket is starting to break through.

''This is busting into a male stronghold where women in the past were only invited in if they had a tea towel over their shoulder,'' he said.

''[Playing at Willows] has always been on my radar because I used to see the likes Richie McCaw playing against his old Otago Boys' team.

''Finally all the dots stacked up and we've been invited up there.''

The game is a 40-over affair. Both sides may be a little rusty.

St Hilda's has been training at King's High School indoor net but attempts to organise a practice game failed.

''We'll just have to do our best but I suspect Christchurch Girls' will be in the same boat.''

''They've got some great talent as well. We are probably the No1 and No2 school girl teams in the country at the moment, so it will be an interesting fixture. And it will give us a benchmark going through to the nationals.'