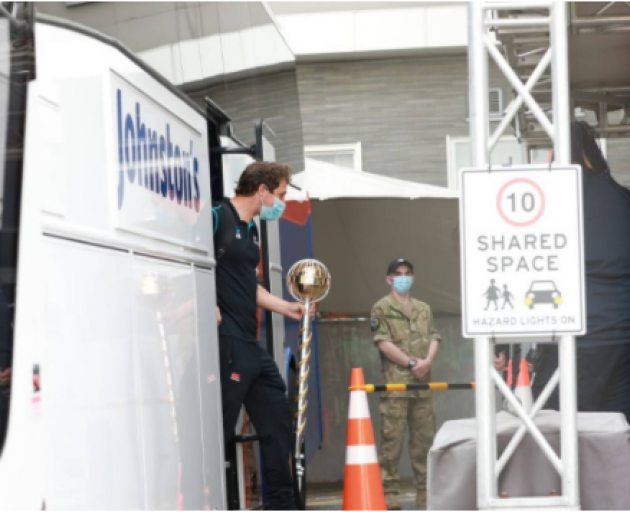 Retiring Black Caps wicket keeper BJ Watling carries out the mace the side was awarded for winning the ICC's test world championship as the team enter MIQ in South Auckland. Photo: NZ Herald
Brace for the Mace.

The Black Caps will take the ICC World Test Championship trophy around the country on a week-long, nationwide tour which arrives in Dunedin and Invercargill on August 1.

Plans have been drawn up to start the tour in Whangarei on July 26, and to visit Auckland, Tauranga, Hamilton, New Plymouth, Palmerston North, Wellington, Christchurch before completing the victory tour in Dunedin and Invercargill.

It is the public’s opportunity to be photographed with the unique trophy and collect autographs.

New Zealand Cricket chief executive David White said although parades and other ideas had initially been ruled out because of managed isolation requirements and the fact some players had remained in the United Kingdom, demand from the public to be included in a celebration had forced a re-think.

“It’s quickly become apparent that Kiwis want an opportunity to be part of, and to share in this historic achievement,” White said.

“We’ve been inundated with requests to do something so that New Zealanders can join in with the team and share the moment.’’

The Black Caps and support staff now in managed isolation will be released on Saturday and White said it was essential they were allowed to spend time with their families and friends before the trophy tour.

Along with the White Ferns’ ICC World Cup triumph in 2000, the Black Caps’ World Test Championship win was comfortably the biggest achievement in the history of New Zealand cricket, White said.

NZC’s intention is to have the Mace on display at every Black Caps home international game this summer.