Umpire brings up a hundred of his own 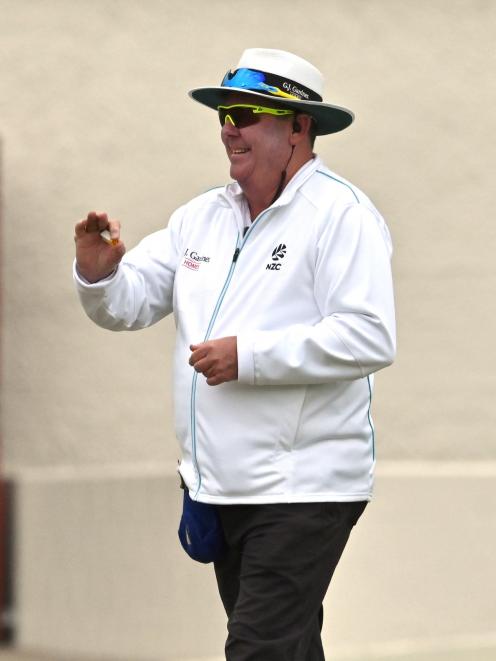 The 60-year-old became just the 10th New Zealand umpire to notch 100 first-class games when he strolled out to the middle to officiate in the Otago-Central Districts Plunket Shield match at the University of Otago Oval.

The former Otago all-rounder has also umpired in 100 list A games and 104 twenty20 matches.

It is a wonderful achievement, and the teams marked the occasion by forming a guard of honour.

New Zealand Cricket match referee Gary Baxter made a brief presentation and described Walker as ‘‘a great ambassador’ for the game.

His accuracy, decision-making and humour are greatly admired in the domestic cricket scene.

Walker, who played 40 first-class games, 39 of them for Otago, donated a ‘‘five minute bell’’ to the Otago Cricket Association in the name of the association’s former chief executive Ross Dykes.

‘‘Ross Dykes has always been a great help for me along the way, so I just thought to mark my 100th first-class game I’d like to give something back,’’ Walker said.

‘‘Ross is very much a traditionalist and had talked about having a five minute bell at the ground. Through the help of [operations manager] Tim O’Sullivan we managed to sort something out.

‘‘So there is a five minute bell now in place at the University Oval.’’

The bell is rung five minutes before the start of play to inform the players the game is about to begin.

‘‘It makes our job easier because we won’t have to go and find them,’’ he said.

Walker had a memorable introduction to first-class umpiring. His debut was in a match between Canterbury and Central Districts at the Village Green.

Peter Fulton scored a hundred before lunch on day one and ‘‘I had the pleasure of seeing Paul Wiseman take nine for 13 from my end’’.

‘‘It was quite a memorable occasion. It certainly sticks in my mind that game.’’

Walker has no plans to retire, but said he would miss the camaraderie when he does leave the game which has been such a big part of his life.