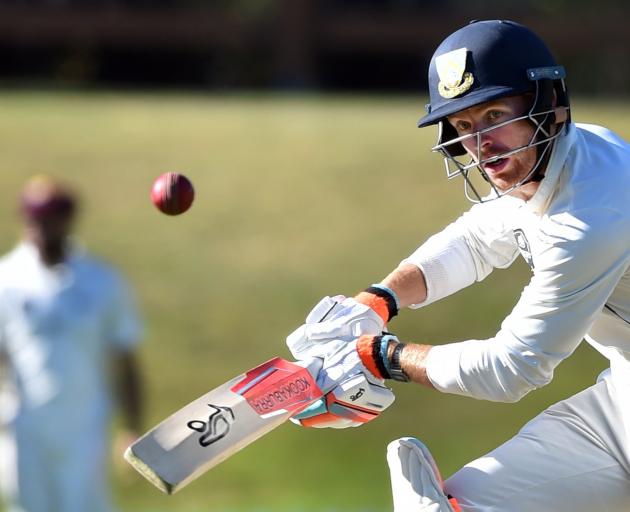 The hard-hitting left-hander missed the rained-off T20 against the Northern Brave at Seddon Park on Friday.

Otago cricket explained his absence was down to "not receiving his second Covid-19 vaccination".

His second shot was scheduled for December 10, the release stated.

"Once he has received this second vaccination, he will be available to take a full part in the rest of the domestic season."

"There is still a little uncertainty about Nick’s availability, although he will not be available . . . [this] weekend," he said in an email.

"I won’t be making any comment about vaccination status at all. But when I have confirmation, I can at least confirm what next game Nick will be available for."

Kelly, who was unavailable to be interviewed yesterday, was training with the team earlier this week.

The 28-year-old hit a rapid double century in a first-class game last month and he is a key cog in the batting line-up.

Llew Johnson replaced Kelly in the line-up and is likely to get the spot again.

The 26-year-old has been sidelined with a hamstring injury since the opening game of the season and will probably miss another couple of weeks.

The Volts made a rapid transition from first-class to coloured clothing cricket and suffered the misfortune of recording three losses in three different formats in a week.

But despite a shaky start to the one-day and T20 tournaments, coach Dion Ebrahim was upbeat.

He felt the Volts batted well in the opening T20 but were undone by a "once-in-a-season" knock by Dane Cleaver.

Cleaver swatted an unbeaten 114 from 54 balls to help his side clinch a five-wicket win.

The T20 at Seddon Park was shaping up nicely for Otago until rain intervened.

"It is hard to gauge from such a small snapshot," Ebrahim said

"But we batted very well. We showed the depth we have plus the power we have.

"We might have missed on occasions with the ball but we obviously got hurt by Dane.

"In Hamilton, we were outstanding with the ball and in the field.

"We’re quite disappointed we weren’t able to complete that game because we would have restricted them to well below par and our batting line-up would have had that chase in hand."

New Zealand Cricket has made some changes to the domestic season following the move to the new Covid-19 traffic light system.

Some games have been shifted or rescheduled but the most notable change has been to ditch the one-day elimination final.

There will be a straight final between the top two teams instead.

Auckland and Otago will play one fewer game than the other four teams, so the order of the standings will be decided on the average amount of points scored by a team per game.