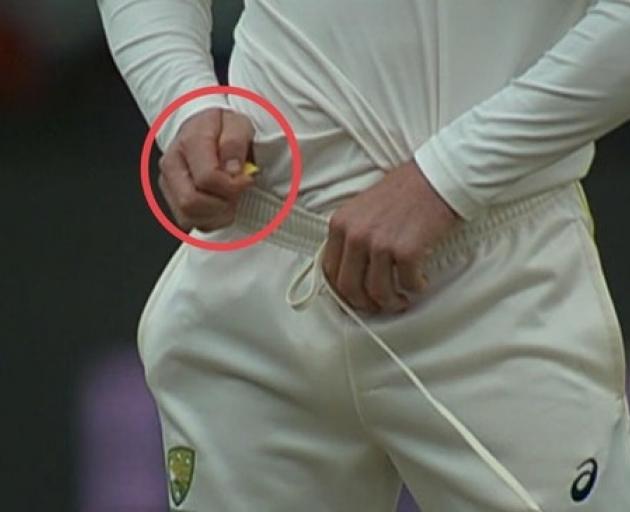 Cameron Bancroft was summoned for a chat to the umpires after footage showed him with a small yellow object he was later seen putting down his pants. Photo: Reddit
Steve Smith insists he has no plans to relinquish the captaincy over a ball-tampering saga destined to represent one of Australian cricket's darkest hours.

Smith has confessed Australia's leadership group authorised the illegal practice on day three of the third Test against South Africa in Cape Town.

Players hatched the idea of cheating with sticky tape, which they hoped would capture debris from the pitch and scuff one side of the ball, at lunch on Saturday.

"I won't be considering stepping down. I still think I'm the right person for the job," Smith told reporters. 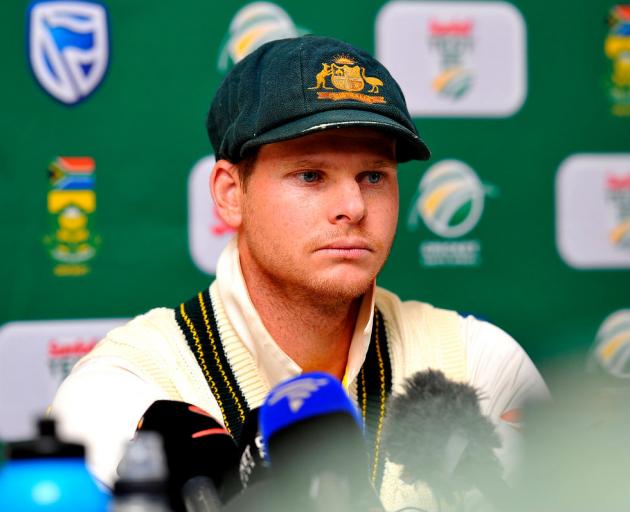 Australia captain Steven Smith admitted he and a senior group of players were behind the tactic. Photo: Getty Images

Meanwhile, Michael Clarke, who retired after Australia's lost Ashes series of 2015, said he would consider returning in the wake of the scandal if he was asked.

"If I was asked by right people, then I would think about my answer," Clarke told Channel Nine's Sports Sunday.

He laballed the incident as "disgraceful".

Cricket Australia CEO James Sutherland said it would not rule on Steve Smith's future as captain until it completes a probe into stunning ball-tampering revelations that have plunged the test team in crisis.

Sutherland's comments came as a shocked nation digested reports from South Africa that Smith and senior players conspired to change the condition of the ball using sticky tape and grit from the pitch during the third test in Cape Town.

Former players and pundits have called on Smith to step down immediately, describing his position as "untenable".

Sutherland, however, said the 28-year-old would continue to lead the side while the investigation played out.

"Steve Smith is currently the captain of the Australian team," Sutherland told reporters in front of a huge media scrum outside the Melbourne offices of Cricket Australia

Cameron Bancroft used the tape while working on the ball in the post-lunch session then attempted to hide it from umpires.

Bancroft has been charged with ball tampering by match referee Andy Pycroft but the heat is well and truly on the man behind the plan.

"Today was a big mistake on my behalf and on the leadership group's behalf as well," Smith said.

"I take responsibility as the captain. I need to take control of the ship.

"I'm incredibly sorry for trying to bring the game into disrepute the way we did.

"This is certainly something I'm not proud of and something that I can hope to learn from and come back strong from. 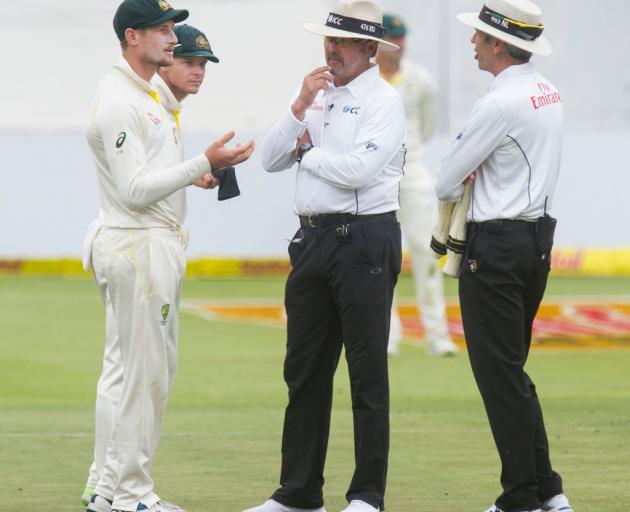 Cameron Bancroft was summoned for a chat to the umpires, but initially denied he had tampered with the ball. Photo: Getty Images

The skipper wouldn't divulge the other teammates involved in the discussion. The leadership group has featured David Warner, Mitchell Starc and Josh Hazlewood in the past.

Smith, with the exception of a couple of incidents on a spiteful tour of India last year, had enjoyed a squeaky-clean start to his century-laden captaincy.

"I know the boys in the shed are embarrassed as well and I feel for Cam.

"It's a poor reflection on everyone in that dressing room, particularly the leaders.

"If we weren't caught I'd still feel incredibly bad about it ... it's a big error in judgment.

"It was a poor choice and deeply regrettable.

"I can promise you it won't happen again."

When a player cannot feed corn flakes to the lucky hamster he keeps in his jockstrap, what is cricket coming to? https://t.co/k2NNMryw2R— Andy Zaltzman (@ZaltzCricket) March 24, 2018

Smith insisted coaching staff, including Darren Lehmann, were not aware of the premeditated plan and that his side have never tried using tape to scuff the ball before.

"Obviously it didn't work. The umpires didn't see it change the way the ball was behaving," Smith said.

"We saw this game as such an important game.

"We've seen the ball reversing quite a lot throughout this series and our ball just didn't look like it was going to go."

Bud you know nothing in professional sport is done without the consent of your captain and coach... Tough times ahead.— Dale Steyn (@DaleSteyn62) March 24, 2018

Discussion about both sides attaining early reverse-swing has dominated the series.

Questions are already being asked about the tourists' conduct in previous Tests.

"You can ask questions as much as you like but I can promise you this is the first time it's happened," Smith said.

"It’s not on and it won’t happen again, I can promise you." Mate, your dreamin' ...
and I think some other Ozzie used those words after he forgot he was in a cricket game and started playing bowls. The Ozzie team should be fined ALL match fees and they should be donated to worthwile charities. As for the players, coaches, management etc., deport them back to the land of dreamtime on the next submarine as deck cargo.