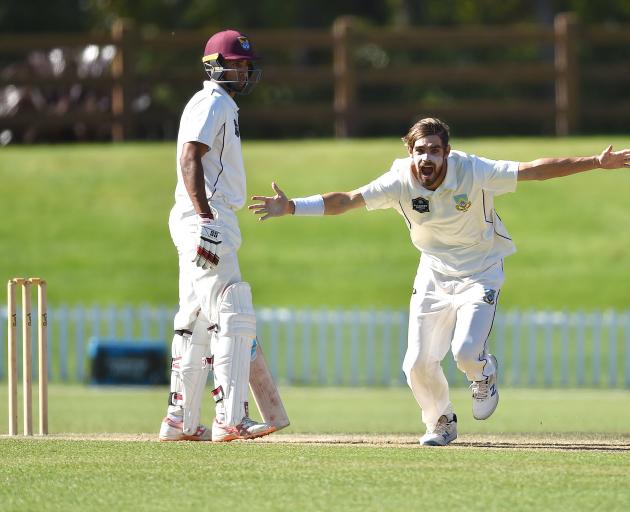 Otago wrist spinner Michael Rippon celebrates the wicket of Northern Districts batsman Brett Hampton during the Plunket Shield match at the University Oval yesterday. PHOTO: GREGOR RICHARDSON
What if Otago’s Dale Phillips had held on to one of the two chances he had to catch out Jeet Raval?

What if wicketkeeper Max Chu would have gathered the ball and stumped the classy left-hander moments before the tea break?

What if Mitchell Renwick had not bobbled a slip catch late in the day to allow the former international another reprieve?

But what happened was Northern Districts clinched a tense three-wicket win in the Plunket Shield clash at the University of Otago Oval yesterday.

Raval scored a match-winning and undefeated 161.

Ish Sodhi kicked in with a valuable 40 in a damaging 92-run stand for the sixth wicket, and tailender Joe Walker played a missed a couple of million times but survived to chip in 24 not out.

That is what happened.

And what happens now is Otago gets to reflect on a game that mirrored its season.

The Volts were not able to win enough of those critical moments.

‘‘The only time we came unstuck in this game was due to inexperience really.

‘‘We had two opportunities to kill off the game with the bat ... and today we had chances which would have certainly changed the game.

‘‘You can’t let a batter like Jeet off four times. That probably cost us the game.

‘‘But we took this game to the fourth-last over of the last day and we were still competing. It was a hell of a game of cricket and I’m more proud of that than worrying about the chances missed.’’

Northern Districts resumed on 45 for none chasing 317 for the win.

Otago needed 10 wickets for victory and collected the first in the opening over.

Henry Cooper was brilliantly run out for 15 by Nick Kelly.

Peter Bocock was promoted to No3 in place of Bharat Popli who was injured.

He batted for nearly an hour before edging a wide legside delivery on 22.

It was nice catch by Chu but not one of the great deliveries from Jacob Duffy. Still, it collected a wicket and he had earned his luck.

Angus McKenzie was bowling tightly as well. He got a delivery to rise off a length and Joe Carter (13) gloved it.

But the wicket which brought the most excitement was that of BJ Watling. The New Zealand gloveman shaped as a daunting obstacle for the Volts.

But Michael Rippon trapped him lbw for four.

Raval was set at one end, though. And the game was nicely poised with Northern Districts 150 for four at lunch.

That balance shifted a touch when all-rounder Brett Hampton was bowled by a big-turning delivery from Rippon for 23.

Theoretically, that opened up an end. Sodhi is in the side for his bowling but he supported Raval through to his 17th first-class century.

The visiting side dominated the afternoon session, added 94 for one.

There was an opportunity to break the partnership in the last over before the tea break.

Rippon got the ball past Raval but Chu could not grasp the stumping opportunity.

He had been dropped twice earlier — one would have been a stunning grab — and Otago desperately needed to take on of those opportunities.

The match was slipping away from Otago but cricket can always find a way to surprise you.

And Rippon found that way. He trapped Sodhi lbw and then captured the wicket of Neil Wagner when he spooned a checked drive to Nick Kelly.

Now all eyes were on Rippon (four for 117) and whether he could pry out the remaining wickets, or whether it would be Raval who would guide his side to the win.

In the other games, Canterbury and Central Districts had a draw at McLean Park, while at Eden Park Outer Oval Wellington held on for a tense draw against Auckland.

The Aces were chasing 273 to win but were restricted to 267 for seven.

Will O’Donnell was undefeated on 137. He scored a hundred in the first innings.

B Watling lbw b Rippon 4

B Hampton b Rippon 23