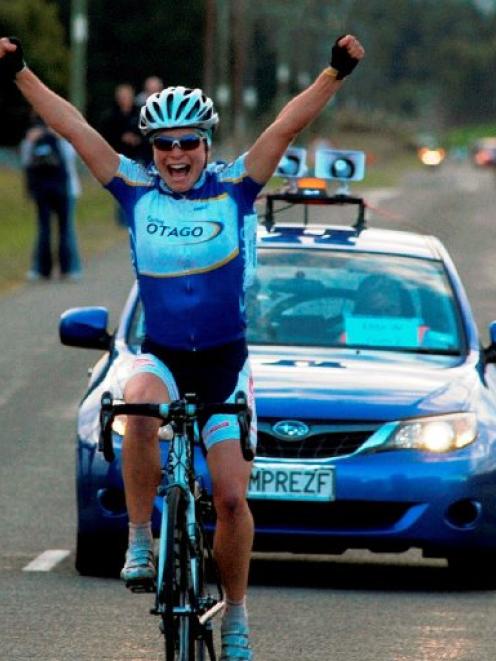 Reta Trotman, of Dunedin, celebrates her victory in the elite women's race at the national club road championships in Hawkes Bay on Saturday. Photo by Don Kennedy.
Alison Shanks is the world champion who rides under the biggest spotlight, but there are two other Otago women also shining on two wheels.

Dunedin cyclist Reta Trotman and Central Otago young gun Sophie Williamson celebrated from the top of the podium at the national club road championships in Hawkes Bay on Saturday.

Trotman (Cycling Otago) won the 116km women's road race, and Williamson (Central Otago Wakatipu) backed up from winning the 15km sprint on Thursday with another under-19 gold, this time in the 87km race.

Trotman (23) was to have graduated from the University of Otago, with a degree in nutrition to add to her physical education degree on Saturday, but she showed she had the right formula to head a talented field, which included the Olympic track cycling quartet of Shanks, Jaime Nielsen, Rushlee Buchanan and Lauren Ellis.

Trotman, a former national gymnastics representative, did more than her fair share of hard work, going clear for nearly half the race in a two-strong break.

Shanks, Nielsen and Buchanan dragged two others up to the leading pair in the final of four laps in the race over a testing circuit near Taradale.

Rather than wait for the final sprint, Trotman attacked again up the hills, receiving some help from Otago clubmate Shanks as the young rider remained clear to win in 3hr 13min 30sec.

Shanks won the sprint for second in the chasers 50sec back ahead of talented young North Harbour prospect Georgia Williams.

"The plan was to do a lot of work - maybe not that much - but in the end, I got there," Trotman said.

"I promised myself that I would attack on the hills, no matter what, because I don't have the speed of those track girls. I kept to my promise. It was awesome.

"I really put it down for about 10 hard strokes and looked back and couldn't believe there was no-one there.

"Ali was awesome. I was on the inside and she held them upand dropped the pace at thestart of the hill a little bit, which was great for me."

It was a good hit-out for the Olympic-bound track riders, who mixed racing this week with training and major planning sessions before they head to the United States to begin their concerted build-up for London.

Williamson edged out Cassie Cameron, of Wanganui, in a sprint finish to win the under-19 race.

The pair are using the road to prepare towards this year's world junior event, to be held in Invercargill in August.

"I love racing. I find it brings me up well," Williamson said.

"That was pretty close, though.

"The road racing is a big part of the build-up for me.

"I am pleased with my form this week, which shows I have a good base."

Williamson heads to the United States next month, to race and train in Milwaukee and Pennsylvania, before coming home for the world championships.

"The world championships are going to be so big.

"To race at home in a world championship, in front of your family and friends, is going to be so awesome."

On Friday, Tom Vessey, of Alexandra, finished third in the 116km under-19 men's road race.