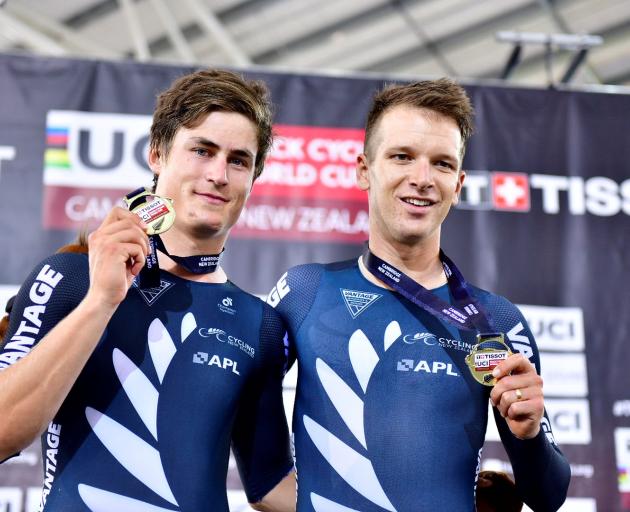 The team won eight medals, including five golds, at the Avantidrome this week—– the most victories by any team.

The New Zealand elite team was boosted by omnium world champions Campbell Stewart and Aaron Gate who provided the highlight on the final day when they combined to win the 50km Madison race.

"The performances on the track have been good, but I’ve been very impressed with what’s happening off the track as well too," Cycling New Zealand high performance director Martin Barras said.

"As a programme we’re coming together. Process is what’s going to get us to where we want to be and we’re very much on track."

The Madison was the highlight last night with the much-anticipated battle between the Kiwi pair and celebrated Australians Kelland O’Brien and Cameron Meyer.

After the Kiwis attacked early to put a lap on the field, the Australians responded to draw level as the pair lapped the field again, and then put the pressure on New Zealand.

They weathered that storm before charging clear to lap the field for a fourth and final time to put the result well beyond threat.

New Zealand’s four laps on the field, as well as six sprint wins and points in 14 of the other 20 sprints meant it finished with 129 points.

Australia was an enormous 42 points back, with the Italy team of Michele Scartezzini and Francesco Lamon third on 57 points.

"We really wanted to push the boat out and see what we could do over the 50km race. The world cup here back in January was 30km but the Olympic distance is 50km so we wanted to get stuck in," Gate said.

"After we got ahead we were able to follow and cover them and make sure we were picking up enough points to open the gap and then we were able to pick up another lap at the end which gave us the buffer," Stewart said.

On Saturday night, Stewart had again belied his years to dominate the omnium event.

The crucial move came in the penultimate sprint when he outkicked Meyer and Kazakhstan’s Artyom Zakharov to establish an unbeatable advantage.

He was fifth in the scratch race and the tempo, and won the elimination and points races in a classy display to push him to the top of the world rankings.

Stewart won with 142 points from Meyer 133 and Zakharov 129, to back up his win in the four-discipline event from Hong Kong last week.

"It was just an awesome kind of day," Stewart said.

"I started off consistent and managed to hold off a fair few attacks from the top riders, chased them down, eventually got the sprints and got there in the end.

Holly Edmondston, a member of the winning team pursuit on Friday, won the scratch race on Saturday night and the pairing of Michaela Drummond and Jesse Hodges claimed a bronze medal in the Madison.

Edmondston was one of only four riders to lap the field.

She then threaded her way through the field on the final lap to edge out Olga Zabelinskaya, of Uzbekistan, and Irishwoman Lydia Gurley.