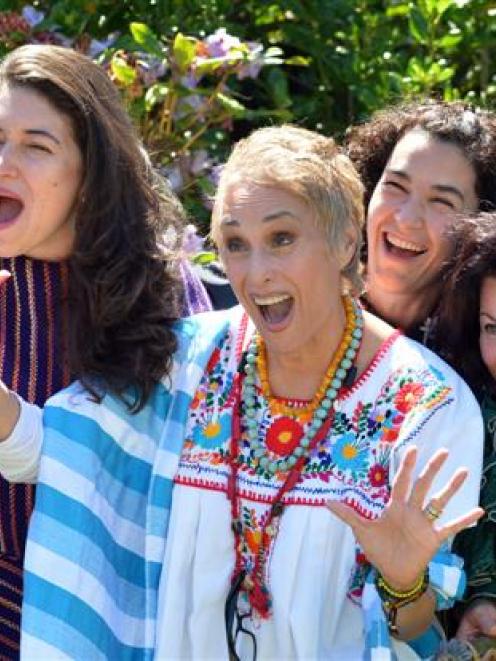 Hoping to celebrate a Mexico win against the All Whites in Dunedin today are (from left) Dora Sierra, Lina Lastra, Veronica Larraga, Andrea Burgos, Carmen Aliberch and Veronica Ruede. Photo by Peter McIntosh.
It is not quite mission impossible. More mission improbable.

New Zealand fans will be praying for a miracle in Mexico City this morning when the All Whites face football superpower Mexico in the first leg of their World Cup qualifier at Azteca Stadium.

New Zealand is hoping to qualify for only its third World Cup, after Spain 1982 and South Africa 2010.

However, there is a Mexican stand-off to negotiate, before any thoughts of Brazil next year. And most Mexican fans in Dunedin were confident yesterday.

''Mexico will win 3-1. We will give you one chance,'' Veronica Larraga, of Mexico City, said.

However, some had divided loyalties.

''I'll definitely be watching the game, but my heart is a little bit split,'' University of Otago Spanish programme co-ordinator Rogelio Guedea said.

''I want the All Whites to do well and I want Mexico to do well.

''I'm a bit nervous and I'm not sure what will happen, to be honest. Mexico has not been playing well and the All Whites defenders are very strong.''

Dr Guedea believed the local conditions could tax the visitors.

''The game will be about 2pm, local time, when it can get over 50 degrees [Celsius] in Mexico City. I also don't know how the altitude will affect the New Zealand players.''

The assignment could not be much tougher for the All Whites. Mexico has qualified for every World Cup since 1990 and the match is being played 2240m above sea level in front of 105,000 fanatical fans.

The All Whites will be the All Blacks this morning, playing in their black alternate strip.

A record New Zealand football crowd of 37,000 will attend the already sold-out second leg of the World Cup qualifier, at 7pm next Wednesday, at Westpac Stadium in Wellington.