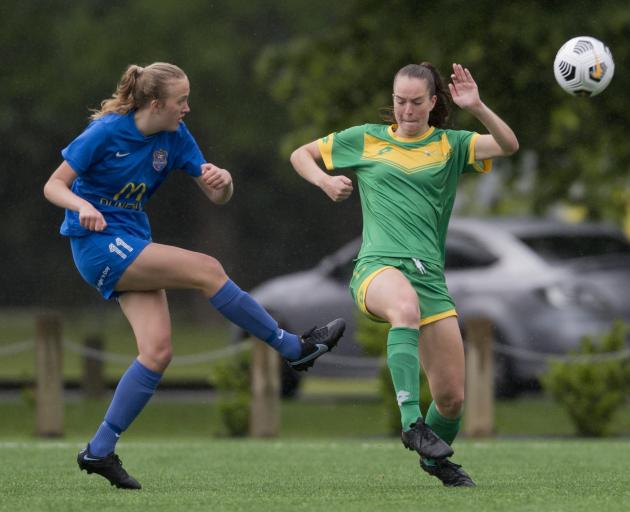 Southern United forward Emily Morison sends in a cross ahead of Central defender Kate Mori at Logan Park on Saturday. PHOTO: GERARD O’BRIEN
The win did not come as easily as might have been expected.

In the end it was comfortable enough for Southern United at Logan Park Turf.

Its goal was barely threatened and it came up with two exceptional second-half finishes.

But it was forced to come from behind and it was not until Shontelle Smith’s 83rd minute long-range stunner that the 3-1 win over Central was comfortable.

It was a result that leaves it unbeaten in the South Central Series, following its upset of Canterbury United.

Southern dominated possession and made the majority of the play throughout.

It regularly found its way into the box, but the Central defence proved resilient and tough to break down.

Indeed, for all its play, Southern trailed for the opening half-hour.

Central had begun the game with a lively press, which Southern initially struggled to handle in its own half.

It was that which helped the visiting side to an early lead.

Jessie Falloon was played into space behind a scrambling Southern defence in the 10th minute.

While Hannah Mackay-Wright raced across to try to cover her, Falloon was able to toe it home from the left into the right corner.

It was the only genuine shot Central fired the entire game.

Yet it left Southern having to scrap for the next 50 minutes to finally take the lead.

It found plenty of space up the left wing, Renee Bacon making several searing runs and Chelsea Whittaker creating chances through the middle.

The Central defence held well, until it finally yielded in the 31st minute, when Devyn Crawford’s own goal drew Southern equal.

A prolonged goal-mouth scramble, following a corner, had preceded the goal.

Mackay-Wright had the final Southern touch, looking to finish from a tight angle, before Crawford’s stray boot sent the ball into her own goal.

It took another 30 minutes of pressure for Southern to take the lead.

For the second week in a row, Rose Morton won the race to the ball and played a fantastic first-touch pass to open up the defence.

She found an unmarked Margarida Dias up the right, and Dias was clinical in her finish, one-on-one with keeper Brooke Bennett.

At that point, a win looked likely — Central had run into a defensive wall every time it approached Southern’s goal.

But it was not until Smith’s late piece of brilliance that it became comfortable.

The substitute midfielder launched from well outside the goal box, clearing over the top of a diving Bennett and rattling in Southern’s third off the right post.

In the other game, Capital beat Canterbury 3-1 in Wellington, leaving it joint top with Southern on six points.