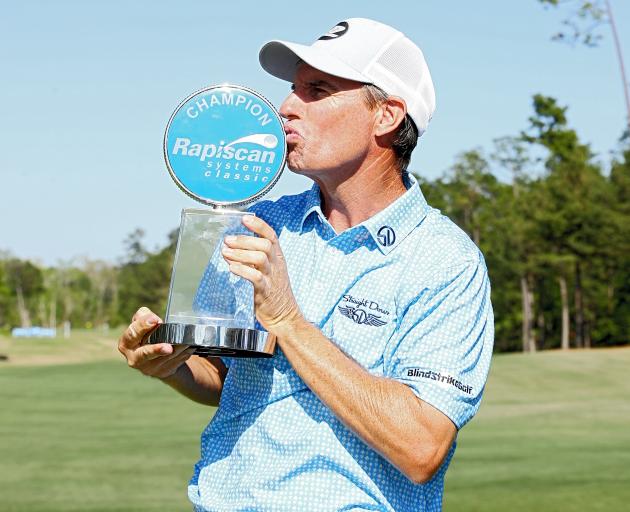 New Zealander Steven Alker kisses the Rapiscan Systems Classic trophy after winning the tournament with an 18-under score in Biloxi, Mississippi, on Monday. PHOTO: GETTY IMAGES
Southern stalwart John Griffin is as surprised as anyone watching New Zealand golfer Steven Alker tear it up on the PGA Champions Tour.

Griffin is not surprised at Alker’s success, you understand — he is surprised so many fans in this part of the world are raising their eyebrows at a Kiwi flourishing on one of the world’s elite, and unique, tours.

The long-time professional and Jacks Point general manager is not remotely shocked his former protege has been raking in the cash, most recently a handy $NZ347,000 for winning the Rapiscan Systems Classic in Mississippi with an event-record score of 18-under-par.

It follows Alker’s maiden win ($469,000), the TimberTech Championship in Florida, after just six weeks on the tour, and his loss to the great Miguel Angel Jimenez in a playoff in Hawaii ($288,000).

Alker is third on the Champions Tour money list — behind Jimenez (US Open runner-up and two-time Ryder Cup champion) and Retief Goosen (two-time US Open champion), and ahead of Bernhard Langer (two-time Masters champion).

Griffin, who has helped coach Alker on and off for nearly 40 years, is loving every moment.

"I was actually chatting to him the other day, and it’s just fantastic," Griffin told the Otago Daily Times.

"He’s so happy. He’s enjoying playing golf, and he loves to win.

"Steve has always loved the challenge of getting out in front of a tournament, and he sets really high goals for himself."

The Champions Tour, for elite golfers aged 50 and over, is extremely competitive.

Griffin had no doubt Alker would be a success when he joined the tour last July after a 26-year professional career that included 11 wins on Australasian, Canadian and second-tier American tours.

"He’s kept himself fit and strong. He leads a very simple life with a loving wife and family, and great support.

"When he moved to the seniors tour, he was back competing with guys his own age. Over the last 10 years, he’s been competing with 20-year-olds, and there’s a huge difference.

"A lot of golfers don’t survive this long. Their back or their elbow or their shoulder goes. But Steve has been able to maintain his health and his love for the game.

Alker had a very solid professional career before joining the Champions Tour, Griffin pointed out.

But his brief forays into the elite PGA Tour highlighted the disadvantage of playing against modern golfers with bulging muscles and the latest technology.

"Quite simply, he wasn’t long enough. He didn’t have the power. And golf is all about power now.

"If you can’t hit it long off the tee, you simply can’t attack the flags, because greens are fast and firm.

"Now, he’s gone from being the shortest driver on tour to one of the top 30 drivers on the seniors tour, and that’s allowed him to play the game on more of an equal footing."

Griffin first met Alker when he moved to Hamilton in 1986 and got involved with the national coaching programme.

Alker, just 14 at the time, was identified along with Phil Tataurangi and Grant Moorhead as a future champion.

"Steve was always a really talented golfer with an amazing short game.

"He’s always been of very slight build, so what he didn’t have in terms of strength and power, he’d make up with finesse, and he had a great instinct for the game.

"He’s never lacked any desire or dedication to do the work needed to get better."

The pair remain in regular contact, and Alker often stays with Griffin when he returns to New Zealand.

Griffin’s former offsider, Paul Parlane, is now based in the US and works with Alker on his swing.

"Steve pretty much looks after himself these days. But we talk about little parts of his game whenever he’s about."

The Champions Tour is unique in world sport in that it attracts huge public and commercial interest even though the competitors, in theory, are years past their peak.

It was hard to maintain playing privileges but Alker’s latest success meant he was exempt till the end of next year and had plenty of time to keep winning, Griffin said.