Queenstown golfer Ben Campbell was one shot away from the money at a ground-breaking tournament at the weekend.

Campbell missed the cut by a single stroke at the International Series England at the Slaley Hall club in Northumberland. 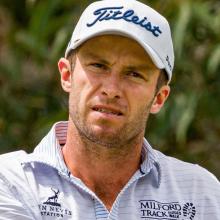 He fired rounds of 72 and 74 to finish in a tie for 72nd and just miss out on playing for prizes.

Campbell was a model of consistency at the start of the tournament, carding 14 straight birdies before a roller-coaster finish that featured double bogey, bogey and two birdies.

In the second round, he was even-par through 16 holes before dropping three shots over the final two holes.

The tournament was the first full-field Asian tour event to be played outside the Asian continent.

It was the second tournament of the 10-round International Series, the first having been played in Thailand in March, backed by Greg Norman’s LIV Golf.

Zimbabwean Scott Vincent won the $3million International Series England by one stroke to record his maiden win on the Asian Tour.

Ben Campbell (30) has had two solid pay days on the Asian Tour this year as he continues his comeback after a long spell out with injury.

He banked $47,000 for his eighth placing at the Singapore Open in January, and pocketed $41,000 for eighth-equal at the APGC Diamond Cup last month.

Campbell is now entered for the Korean Open starting on June 23 before his big moment of the year.

His runner-up effort at the Vic Open in February — Papadatos beat him by one shot — earned qualification for the 150th British Open at St Andrews on July 14-17.

Campbell has already played at St Andrews when he was an elite amateur, but teeing off at the greatest of the majors will be a special thrill.