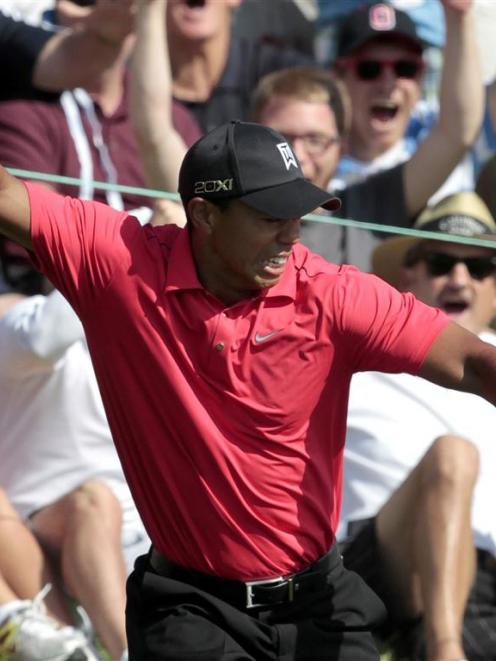 Tiger Woods reacts after chipping in for a birdie on the 16th hole during the final round of the Memorial Tournament at Muirfield Village Golf Club in Dublin, Ohio. REUTERS/John Sommers II
Tiger Woods spectacularly overhauled a fading Spencer Levin and a charging Rory Sabbatini with a few moments of magic to win his 73rd PGA Tour title by two shots at the Memorial tournament.

He began the final day four strokes behind the pacesetting Levin and made a fast start before taking control with a scintillating finish that included a chip-in for birdie at the 16th that was lavishly praised by tournament host Jack Nicklaus.

"Boy, I hit it good today," a beaming Woods said greenside after clinching his second PGA Tour victory of the season in his final appearance before the U.S. Open. "That was some good stuff out there.

"I hardly missed a shot today. I had the pace of the greens really nice today and I made a few putts."

Woods birdied three of the last four holes for a five-under-par 67 and a nine-under total of 279, moving past Nicklaus into outright second place in the all-time standings for career victories on the U.S. circuit.

Nicklaus has 72 PGA Tour wins while Sam Snead leads the way with 82.

"It's been a nice run since I turned pro," Woods said of moving past Nicklaus' total of PGA Tour career wins.

"To do it at age 36 is not too shabby. I feel very proud of what I've done so far and I think I've still got a few good years in front of me."

Sabbatini, who briefly led by two shots on the back nine, closed with a 72 to share second place at seven under with Argentina's Andres Romero, who rolled in a 13-foot birdie putt at the last for a 67.

Levin, seeking a maiden PGA Tour victory, clung to a three-stroke lead at the turn but then limped home to a 75 and a tie for fourth at five under with fellow American Daniel Summerhays (69).

The tournament turned on the stunning shot Woods produced at the par-three 16th where he spectacularly holed out for birdie from greenside rough, from 50 feet downhill.

As huge roars erupted across the course, Woods unleashed his trademark uppercut fist pump to celebrate joining Sabbatini in a tie for the lead at eight under.

Playing in the group behind, Sabbatini bogeyed the 16th, after finding a bunker off the tee, to hand Woods a one-shot lead.

"That was the most unbelievable, gutsy shot I have ever seen," Nicklaus said on the CBS telecast of the Woods chip-in on 16.

Woods, who wore his customary red shirt for the final round of a tournament, then tightened his grip by sinking a nine-foot birdie putt on the 18th green, sparking further roars from the huge galleries watching from below the clubhouse.

"Thanks Jack, I appreciate it," Woods said after being congratulated by the tournament host on his 73rd PGA Tour victory, and his fifth at the Memorial, before walking away to sign his card.