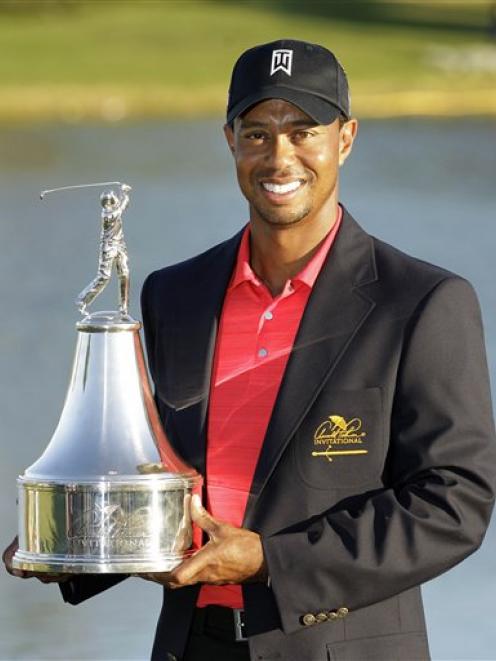 Tiger Woods holds up the championship trophy after winning the Arnold Palmer Invitational golf tournament at Bay Hill in Orlando, Florida. (AP Photo/John Raoux)
Tiger Woods hit so many great shots that he couldn't single one out as the best. Winning was as sweet as ever, even after a PGA Tour drought that stretched over 923 days and 27 tournaments.

The best part about posing with the trophy at Bay Hill?

The conversation was back on golf, his favourite subject.

Just two weeks ago, Woods gingerly climbed into a golf cart and was taken off the golf course at Doral with soreness and swelling in his left Achilles tendon, the same injury that caused him to miss three months and two majors last year.

On Sunday, no-one questioned his health. Woods marched to a five-shot victory in the Arnold Palmer Invitational that restored his confidence and gave him momentum going into the Masters two weeks away.

"This was coming," Woods said. "I've been close a number of times, basically since Australia. Just had to stay the course."

Only a month ago, there were concerns that Woods could no longer make the important putts.

He had missed a 5-foot birdie putt on the last hole to lose in the second round at the Match Play Championship. He missed several putts just as close when he crashed out in the final round at Pebble Beach. But there he was at Bay Hill, knocking in two big par putts on the back nine to keep his distance from Graeme McDowell.

"I just never got close to him," McDowell said.

And then there's the book by his ex-swing coach, Hank Haney. "The Big Miss," which goes on sale this week, has been such a sore spot with Woods that he lost his cool with a reporter earlier this month. The book reveals a driven player who is self-centred and rarely satisfied, no big surprise except that it was a side of Woods he tried to keep private for all these years.

Woods added a chapter to his own book on Sunday.

He won for the 72nd time on the PGA Tour - one short of Jack Nicklaus in second place on the career list - and 84th time worldwide. It was the 16th time he won by at least five shots, and his seventh win at Bay Hill tied the PGA Tour for most wins on a single golf course. Woods owns both marks. He also has won seven times at Firestone.

"I think he really just kind of nailed home his comeback," McDowell said. "Great to have a front-row seat watching maybe the greatest of all time doing what he does best - winning golf tournaments."

The only thing missing was the host himself.

Palmer's blood pressure increased during the final round from new medications, and he was taken to the hospital about 15 minutes before the tournament ended as a precaution. Alaistair Johnston, vice chairman at IMG and his longtime business manager, said Palmer would be kept overnight. "Nobody is overly concerned," he said.

Woods goes to No. 6 in the world, returning to the top 10 for the first time since May 22.

"Heading home now and I can't stop smiling. Thanks to Otown fans and everyone watching for all the love. Get well soon, Arnie," Woods tweeted about three hours after his win.

On a Bay Hill course that was crisp, fast and dangerous, Woods ran off four birdies on the front nine to build a four-shot lead, then kept his mistakes to a minimum for a 2-under 70.

He quickly stretched his lead to three shots on the opening hole when McDowell, who closed with a 74, caught a buried lie in the bunker and made double bogey. After that, it was vintage Woods.

From 267 yards away in the fairway on the par-5 sixth, Woods hit a 3-iron that climbed over the water and landed softly to just over 15 feet away to secure a birdie. Two holes later, facing a tight pin over the water, he ripped an 8-iron from 182 yards that barely cleared the bank and caught a slope to within 4 feet for birdie.

The lead was four at the turn, and McDowell never got closer than three the rest of the way. Ian Poulter had a 74 and finished alone in third, and while he never looked behind him to see what Woods was doing, he could hear it.

This is a win that will resonate.

"He's always a force to be reckoned with when he's not playing his best golf," Poulter said. "And obviously, he's playing a lot of good golf right now. The shots he's hit, just looking at the highlights, he's got a lot of his game back. And when he starts rolling putts in, he's dangerous. So he's going to be a force for everybody at Augusta."

It was the first time Woods had won on the PGA Tour since September 13, 2009, at the BMW Championship. His last win against a full field had been on November 15, 2009, at the Australian Masters.

Twelve days later, Woods drove into a fire hydrant outside his home, and it wasn't long before revelations of multiple extramarital affairs that led to divorce and cost him an impeccable marketing image. Woods has won back the support of fans who love to see great golf, though corporate support has been lagging.

Woods downplayed the significance of Sunday, pointing out on more than one occasion that he considers it his second win since the scandal. He counts the Chevron World Challenge last December, when he went birdie-birdie to beat an 18-man field of top-50 players.

But this was significant - a PGA Tour event with a full field, and a strong field at that. And with a performance so clean that he was never seriously challenged on the back nine.

"I've gotten better, and that's the main thing," Woods said. "I've been close for a number of tournaments now. And it was just a matter of staying the course and staying patient, keeping working on fine-tuning what we're doing. And here we are."

So where does he go?

Next up is the Masters, which looms larger than ever. Woods figures to be a big favorite, along with Rory McIlroy and Phil Mickelson, all of whom have won in the first three months of the season.

"I've won here on a few occasions going into Augusta, which has always been a good feeling," Woods said. "I still have got some work to do, but I'm excited about the things that we have accomplished. It's been very good."

It felt better than that on the 18th hole, when the familiar red shirt was accompanied by a smile that had not been seen in some time at the end of a tournament.