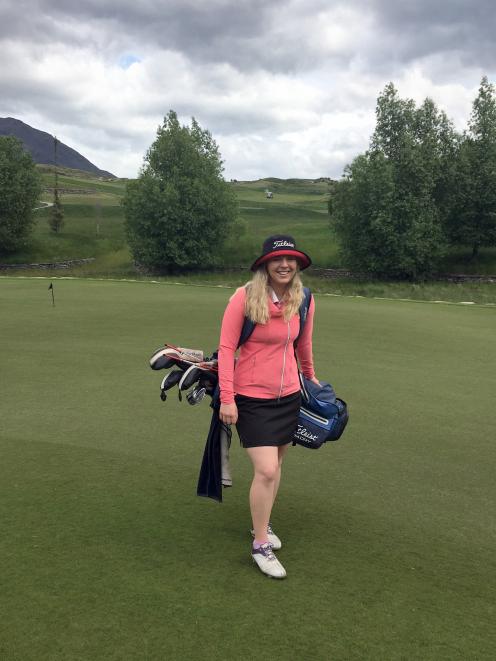 Danielle Bailey gets in some last-minute training at Frankton last week in preparation for the national interprovincial championships starting today. Photo: Supplied
Queenstown teenager Danielle Bailey has enjoyed being exactly that this year — a teenager — but now it is time to get back to golf.

Bailey will line up at No2 for the Otago team at the interprovincial championships at Maraenui Golf Club in Napier, starting today.

It will be the third time at the championships for Bailey who is just coming back into the game after a break.

‘‘I played in China earlier this year for a New Zealand team but after that I focused on school work and just doing some social events,’’ she said.

‘‘It was fun. Just doing normal stuff. Being a normal teenager. Being able to do that and knowing I could go back to golf. It is only in the last few weeks that I have gone back to golf.

‘‘I did miss it. Just being able to be in my own head space, and doing my own thing.’’

Bailey (18) has just finished at Wakatipu High School, having sat NCEA level three and is hoping for good results.

Until then it is back to the golf course and more practice.

Under coach Doug Matthews, who works out of the Frankton course, Bailey has been working hard and completely remodelled her swing. She used to slide into her shots but is now becoming more accurate with the ball.

‘‘It was hard work and I played some shocking golf to try to get it right. But I am happy with how it is now. Doug has helped me so much.’’

She has resumed playing every day and is playing various courses round Queenstown.

She easily won the Champions of Champions event in Cromwell, beating all the other club champions and also won the Queenstown Open.

The right-hander is looking forward to the matchplay event in Napier, as she enjoys the format.

‘‘I just want to win as many matches as possible and do better than last year. I like the matchplay format.

‘‘Just the way if you have a bad hole and hit a few poor shots you can just forget about it and move on to the next hole.’’

When she competed in China for a New Zealand under-19 team, she won every game at the matchplay event.

She aims to get a golf scholarship in the Unites States over the next couple of years and a good performance this week will also help.

She also dabbles in photography so that is another avenue to pursue.

The Otago side will face a tough opening, taking on Auckland this morning. Auckland has won the past three titles. Otago has a bye this afternoon.

Southland is not sending a team to the tournament this year.