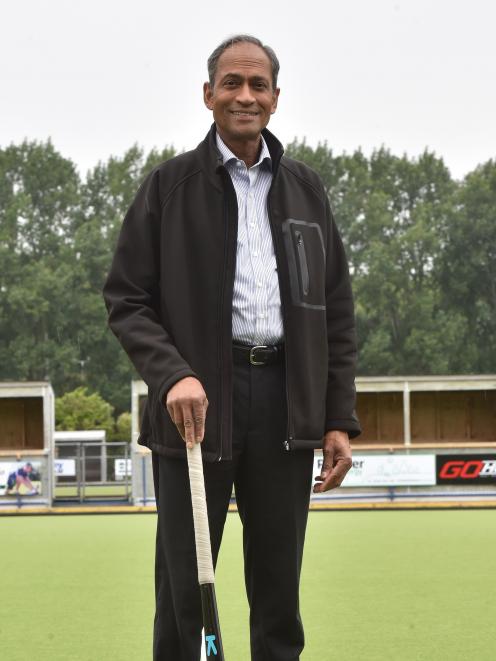 John Daniel at the McMillan Centre. PHOTO: GREGOR RICHARDSON
In a short series, the Otago Daily Times talks to people who do the work behind the scenes to keep their sport going. Reporter Adrian Seconi has a chat with hockey stalwart John Daniel.

Player, administrator, umpire, coach — John Daniel has cut countless oranges into quarters and even held club meetings in his bedroom.

There is nothing the 65-year-old minister has not done for his beloved hockey.

And it has all been worth it.

"I’ve got a lot more back from hockey than I’ve put in and there are so many others who sit in the background and don’t get the prominence they deserve," he said.

He has a long umpiring career and officiated in more than 60 internationals. He has played for New Zealand at masters level, coached the Otago senior men’s team for the past four years and is the president and chairman of the Otago Hockey Association. And that is just a snippet of his contribution.

Born in southern India, Daniel moved to New Zealand in 1970. He lived in Lower Hutt initially and quickly immersed himself in the hockey community. He both played and umpired and did the same when he shifted to Auckland.

In 1974 he co-founded the Howick Pakuranga Hockey Club. And that was when he used to hold club meetings in his bedroom in Walworth Ave.

"There has been the odd time, because it was late at night, that I’ve had people climb in through the window [to attend the meetings]," he said.

Daniel’s umpiring career took off in the mid 1980s and he went on to officiate in 66 internationals.

As a player he has represented New Zealand at masters level and perhaps could have played senior hockey for New Zealand. But when he was at his peak of his powers he gave up playing for a period to focus on his umpiring.

He has no regrets about that decision. He felt the umpiring association in Auckland at that time needed leadership.

"The association had eight, I think, fulltime umpires at that stage and within 18 months we had over 50 people umpiring. Not that it was my doing, it was just the right time."

Daniel and his wife Paula moved to Dunedin in 2000. The couple have three children — two daughters and a son who died last year.

Shortly after arriving in Dunedin he linked up with Kings United Hockey Club and took over the reins of the umpires’ association. He has coached the Otago senior men’s team for the past four years.

There had not been a senior Otago team for some years before that. But when Southern pulled out of the National Hockey League, Daniel felt he had to ‘‘do something about it’’.

"I saw the passion for the game and they needed an opportunity to express themselves. The players were being denied that because we did not have an NHL team.

"I knew I could help them achieve and build an environment where they could do their best and I could not stand by and not do that."

Daniel still mentors umpires in an informal arrangement and has the dual role of president and chairman of the Otago Hockey Association.

He has a string of life memberships and has made a monumental contribution to Auckland and Otago hockey.

Service runs deep in his veins but he has extracted an awful lot from the game throughout the years.

"I love this game because it is one of those that is truly for all ages, all genders, all social economic groups, all cultures and all backgrounds.

"If you have played against or with somebody, you’re mates, and suddenly you can get recognised in the most unlikely places. It is a great community to be a part of."