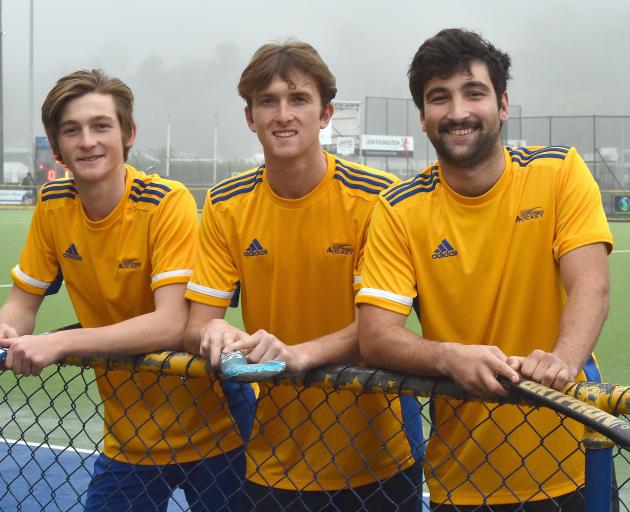 Ward brothers (from left) Patrick, Finn and Jordan will all turn out for the Otago senior team this weekend. Photo: Gregor Richardson
Through the past decade, Otago teams in most age-groups have boasted a Ward brother.

One Ward or another has always been in the blue and gold of Otago on turfs all around the country.

Otago is set to take on Canterbury in the Mainland Cup in Christchurch this weekend and all three Ward brothers are in the senior side.

Many sports teams have two brothers in them but to get three in one representative side is a rarity these days.

The trio have made their marks in the sport, Jordan and Finn both making the Southern Alpiners team in New Zealand Hockey’s premier league last year while Patrick was a member of the King’s High School team which won the Rankin Cup in 2019, the pinnacle of school hockey.

Finn Ward, who is training to be a primary school teacher, was named in the national under-21 squad last month and has been in national development programmes over the past couple of years.

Jordan Ward was first introduced to the sport at a young age by Wendy Russell, the mother of Black Stick Kane Russell, and the others simply followed suit.

Jordan, an apprentice electrician, said the brothers encouraged each other and all just loved the sport.

There had been plenty of backyard practice over the years and learning of the micro skills of the game.

Late nights at the turf almost became mandatory for the trio as they drove each other on.

Jordan is now the coach of the Taieri Tuataras team in the senior competition and there are not too many arguments among the brothers.

Patrick Ward, a year 13 pupil and deputy head boy at King’s High School, plays midfield along with Finn, while Jordan is a defender.

The senior team will head to Christchurch along with other Otago sides keen to bag a win over their Canterbury counterparts.