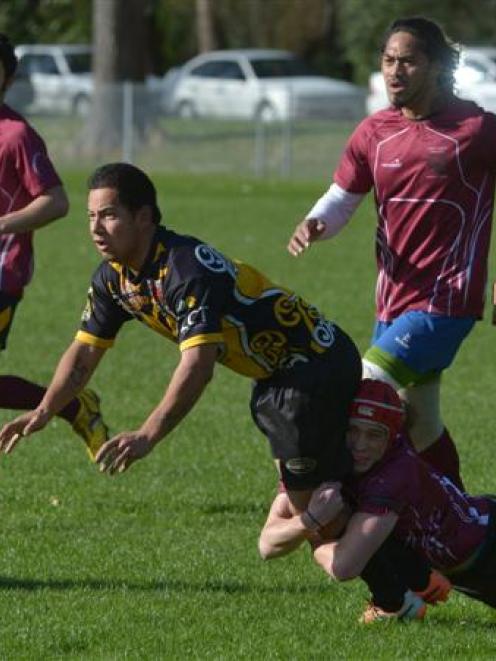 Kia Toa Tigers halfback Joseph Wrathal gets the ball away in the tackle of East Coast Eagles defender Sam Myhill during the game at Logan Park on Saturday. The other Eagles players are Kail Spooner and Kele Sanele. Photo by Gerard O'Brien.
The East Coast Eagles breathed some life into their season when they beat the Kia Toa Tigers 46-26 on Saturday.

The Eagles made the most of their chances to score nine tries to five and keep the winless Tigers on the bottom of the table after three rounds.

Eagles coach and hooker Dave Broughton said he was thrilled to get the ''monkey off our back'', while Tigers captain Koben Katipa offered no excuses, but lamented the 50-50 calls that went against his team.

The Tigers led after an early penalty but the Eagles scored the first try when standoff Hyrum Martin beat the fullback from 20m out to score under the posts.

The Eagles showed some fine defence to twice hold the Tigers out, before they failed to find touch from a penalty, and Tigers prop John Kivaly crashed over near the posts, with standoff Taua Piri slotting the conversion.

As both teams failed to complete their sets and pushed silly passes, there were plenty of chances to score.

The Eagles muscled up on defence and the versatile Jury Arthur grabbed two fine tries inside five minutes to extend the lead to 18-6.

The Tigers gave away penalties, and after second-rower Joe Fisa was sinbinned for a high shot, the ball was spread wide 20m out and Eagles centre Tipene Wairepo beat his man to make it 22-6 at halftime.

The second half began with the Eagles constantly losing possession, but the Tigers failed to capitalise, and rued those missed chances when Martin grabbed his second try.

This sparked the Tigers into life and they clawed their way back with tries to Fisa and standoff AJ Valentine to trail by eight points.

Broughton took matters into his own hands with a fine offload 20m from the Tigers line to give Wairepo a clear run and his team a 30-18 lead, before Tigers back-rower George Fisa cut the lead to eight with 10 minutes left.

Wairepo capped off a fine performance when he grabbed his third try after a scintillating flick pass from George Fruean, before Tigers halfback Joseph Wrathal gave his team some hope with a try with five to go.

The Eagles were more clinical and, after Arthur grabbed his third, he capped off a fine performance when he burst away on halfway and put Mack Cammock in under the bar on fulltime.

With his strong running, Arthur was the Eagles' best player. Broughton controlled the ruck well and prop Ronnie Taurarii was strong in the hit-ups. Wrathal, centre Apii Taia and fullback Thomas Inia showed good touches for the Tigers.