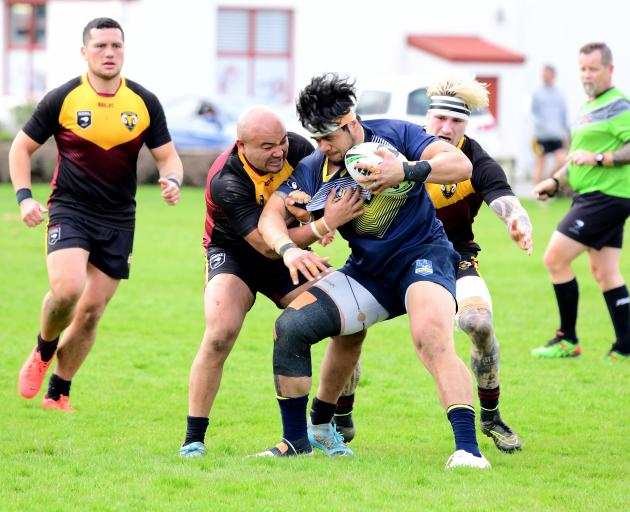 Otago Whalers player Tofatu Solia is on the receiving end of a tackle by Southland Rams defenders Thomas Watts and Dylan Lovett in Invercargill on Saturday. PHOTO: DAVE LOUDON
A high error rate and a slow start proved too much for the Otago Whalers to overcome.

They faced a 16-0 deficit after the opening 15 minutes of their season in Invercargill on Saturday.

While they fought their way back from there, the Whalers were eventually beaten 28-18 by the Southland Rams in the Southern Zone Rugby League Premiership.

Otago coach Dave Reedy said it was a ‘‘dusty old first game’’ as the team struggled to connect.

Players were still figuring out where to be positionally, something he hoped to rectify this week.

The Whalers managed three tries, all in the final 25 minutes of the first half, as they pulled back after their rusty start.

Mika Mafi ran through three defenders to score his, Saimone Samate scored one out wide, and Jake Fowler capitalised when a grubber deflected off the post.

That, combined with the boots of Mackenzie Haugh and Cameron Todd, left the Whalers trailing just 22-18 at halftime.

It was all they could manage, though.

While Otago’s defence improved to give up just one more try, it was unable to add to its own tally.

‘‘First half, we just made too many errors,’’ Reedy said.

‘‘They pretty much shut us down. They played real good — they were a bit too strong for us.

‘‘It just came down to too many errors by us and a few missed tackles here and there.

‘‘[In the second half] we just held on to the ball a little bit more and tightened up our defence a little bit — a lot, actually.

‘‘We tightened up around the middle and worked a little bit harder. But we just had a few dropped balls and a bit of panic trying to score too quick. We dropped the ball and let them off the hook.’’

Centre Delaney McKenzie, who normally plays prop, was another stand-out as he broke the line well and was solid defensively.

The Whalers are at home this weekend, against the West Coast Chargers, in Mosgiel.