Aitken signs off at Highlands after 50 years of racing 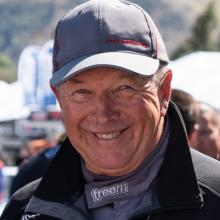 Back in 1968 he was pedalling a "slow" Mini and for his last competitive turns on a track in the South Island Endurance Series' (SIES) one-hour race, Aitken was behind the wheel of a fast Porsche GT4.

Finishing a credible eighth overall, the 69-year-old had no qualms about retiring after a long motorsport career.

Although, he dubbed the Porsche his favourite car, among the stable of rally and circuit racers he has spent a large portion of his life racing, "it's for sale as of today" he said, signalling that his retirement decision was non-negotiable.

One of the founding members of the Cromwell circuit that he drove his farewell laps on, Aitken didn't have to think hard before naming his preferred track.

"Highlands, hands down," he said.

Christchurch's Marco Schelp was overjoyed to win the one-hour race in his Porsche GT3 Cup S after qualifying on pole and leading from start to finish. He credited a pressure-free approach for his success over runner-up Jarrod Owens, of West Melton, in the same model Porsche.

"My plan was just to relax and enjoy racing again. You know when you are relaxed, you are pretty fast," he said.

Timaru's Small brothers Johnny and Chris scored their second podium of the season in their Porsche 997 GT3 Cup car, in their first competitive outing at Highlands.

"We just fronted up, managed our risks and played the safe game," Chris said.

Third for the siblings retained their lead in the four-round series, having won the opener at Teretonga a fortnight ago, when Owens finished fourth.

Within the 60-minute race there are four class categories and Alexandra's Bruce Davidson was thrilled with a second consecutive victory in Class C (3501cc+).

His Chev Corvette C6R ran without any issues and he was happy to just "keep piling the points on" halfway through the series.

Drivers and teams now prepare for the third and penultimate round at Timaru International Raceway on October 19. The final round will be held at Mike Pero Motorsport Park, Christchurch, on November 2.