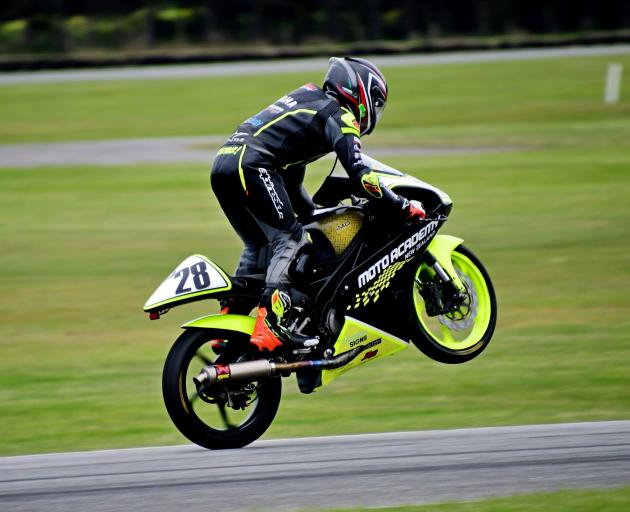 Cormac Buchanan celebrates a treble of wins during the Southern Race Series at Teretonga Raceway last November. PHOTO: MJSMYTH IMAGES
An Invercargill teenager is making history as he travels to Europe this week to take part in the Redbull MotoGP Rookies Cup — the first Kiwi motorcyclist to  be selected. Otago Daily Times Invercargill bureau chief Karen Pasco caught up with Cormac Buchanan, his family and coach, just days before his departure from his Invercargill home.

Motorbike racer Cormac Buchanan is hesitant to get his motorbike licence when he turns 16.

Maybe it is because this 14-year-old motorcycle-riding powerhouse could potentially reach up to 240kmh on his supercharged KTM RC 250 when he takes part in the Redbull MotoGP Rookies Cup in the next seven months.

He admits doing a measly 50kmh on a motorcycle around the streets of Invercargill would feel like going in slow motion.

Buchanan was only a 3-year-old when he got his first bike, although, going by his first experience, you would never guess that 11 years later he would be racing on the world stage.

“The day I got it, Dad started it up and I ran away crying because I didn’t like the noise," Buchanan said.

By the age of 7, he was racing on the speedway track. After a few years he had made his way up through the levels, riding the fastest bike possible for a junior and making his name on the circuit.

When he was 11, he went to Australia to watch MotoGP racing at Phillip Island where seeing the likes of Valentino Rossi racing in real life provided the motivation for him to take the next step up the motorcycle racing ladder.

In 2018, he made the switch to road racing and, because he was too young to race in New Zealand, went to Australia to compete.

Last year, Buchanan claimed the title of New Zealand Supersport 150 champion and travelled to Spain in an attempt to make the cut for the 2020 Rookies Cup but fell just short.

"Even I don’t think I was ready for Rookies Cup at that time," he said.

On his return to New Zealand the focus turned to racing the best he could on a national stage.

Despite a Covid-19-ridden year cutting the season short in 2020, Buchanan’s season was impressive.

He defended his New Zealand Supersport 150 title and also claimed the 300 title as well.

When talking about this year’s racing, he can recite every race, every move.

He is meticulous in his observations of what he did well and what he could do better.

He reaches speeds that would make the hair of the mother of any 14-year-old stand on end, but Buchanan says while he’s racing, the sensation for him is completely the opposite.

“It’s like everything looks fast but it’s actually slow motion.

"I’ve really only felt like I’ve been going fast once."

It was this mentality which Bagshaw said he saw in the young rider and realised he was something special.

At a race meeting in Christchurch, Bagshaw noticed Buchanan was the only rider who changed his helmet cover for each race, "and made no fuss about it".

"That separates the achievers from the rest of them."

As Buchanan speaks about his racing he uses the word "we", it is evident he knows he is not a one-man band. He knows how important the team he has standing alongside him is — his coach, parents and sponsors — in helping him achieve his dreams.

Buchanan will have to continue his school work while away. Although he has left behind his mates at James Hargest College in Invercargill, he is enrolled through correspondence school and will have to complete school work in between races throughout Europe in the Rookies Cup as well as when he competes in-between times for the Microlise Cresswell Racing team in the British Talent Cup.

Dad Stacey has resigned from his job to accompany his son to Europe while mum Kate and sister Mikah will stay in Invercargill, getting up in the early hours to watch Buchanan race.

Mikah said she was proud of her brother’s achievements but there was one advantage of him not being around for a while as he was a fussy eater.