Gina Crampton does not quite know what to expect when she walks on court this Sunday.

The wing attack has probably fed her shooters thousands of times on the Stadium Southland floor. 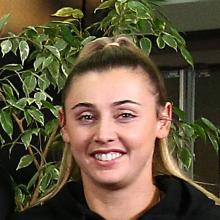 It was a court she called home for nine years and the one where she won her first ANZ Premiership title, with the Southern Steel in 2017.

This time, though, she will return with the Northern Stars as a visitor.

It is not her first trip back to Invercargill — she played the Steel there earlier in the season.

However, the crowd capacity at that game was still limited under the Covid-19 Red settings.

She will get the full effect of "Fortress Southland" for the first time this weekend.

"It definitely had some weird feelings about it," Crampton (30) said of her first trip back to Invercargill.

"But there wasn’t massive crowds then, so I didn’t experience the full capacity of what the crowd can bring.

"I’m expecting that will happen this weekend. I hope they have fond memories of when I did play there and that they’re nice to me."

Crgina cramption ampton moved to the Stars following the 2020 season, having completed nine years with the Steel, accumulating 98 matches for the team.

Despite that, she said the move north had been a good change, although admitted at first she went back and forth as to whether it was the right one.

"The group of girls we’ve got is just an awesome bunch. I’ve really enjoyed getting to know some different people and I’ve made some really great friends, which is always a nice bonus of netball, anywhere you play.

"There’s definitely lots of differences to the Steel. We travel quite a long way to trainings and things like that. But pretty similar in terms of you find your friends and enjoy your team."

Her team has hit form in recent weeks and, at present, has a six-point buffer on the Steel in the scrap for a spot in the top three.

However, the teams face each other in their next two games, which will go a long way to determining who progresses.

The Steel won their first meeting early in the season, although the Stars were under-strength due to Covid-19 at that point.

Crampton knew it was a "do or die" situation for both and was expecting a hard game from her old team.

"It’s always a tough battle with the Steel.

"Obviously I know some of their players very well. But they’ve also got some new people in there since I left, so it feels like a different Steel team to me.

"Hoochie [Te Huinga Reo Selby-Rickit] obviously picks up a lot of ball for them and sort of commands that defensive area.

"The same with Shannon [Saunders]. She’s been playing some incredible netball this year.

"We know they’re a tough side and they’ve got that big target in George Fisher as well. It’s going to be some hotly contested games, I think, and they’re going to be crucial results as well for both teams if we want to make the finals series."

It might not be her last chance at a third title, although Crampton admits she is nearing the end of her playing days.

She hoped to make herself available for this year’s Commonwealth Games and next year’s World Cup, although was unsure beyond that.