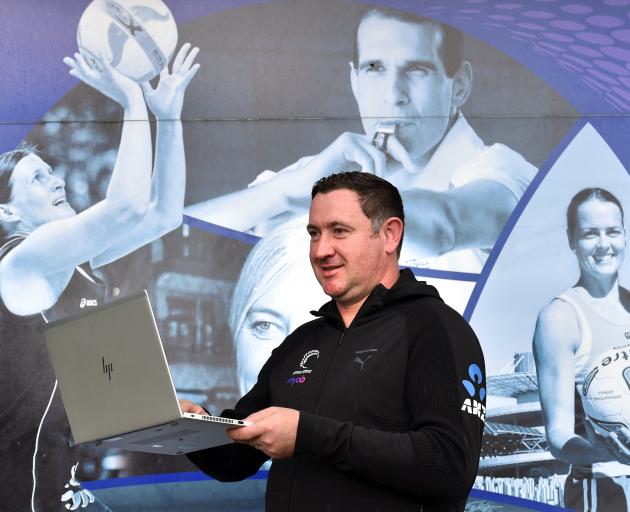 Hayden Croft will be keeping busy next year having landed a job as the Silver Ferns' performance analyst. Photo: Peter McIntosh
Hayden Croft likes a balance, even if that means keeping extraordinarily busy.

Next year he seems to be taking that to another level.

The 38-year-old has secured a new role as performance analyst with the Silver Ferns.

He attended last week's selection camp in Auckland and has signed on through to July's World Cup in England.

Alongside that he will continue his job at the Otago Polytechnic.

There he has been influential in breeding the next generation in a performance analysis course, which has produced many top graduates.

He is completing a PhD and is the acting head of programmes in the physical activity and well-being department.

On top of that, he will work with the analysts in the various ANZ Premiership franchises.

If that sounds like a lot, it is probably because it is.

However, he enjoys both sides of it and feels they could benefit each other.

''I think the reason I do the stuff like the Silver Ferns is teaching's fantastic and it gets you to the grassroots, but it's really great to switch back and forward to do it yourself,'' he said

''I don't think I'd be happy in just one space. A bit of both is ideal.

''When you teach stuff a lot, sometimes you lose perspective of how it's being used.

''So it's really important, I think, to keep in that applied space.''

Originally from Gore, Croft moved to Dunedin to attend the University of Otago's School of Physical Education.

Initially analysing technique from a biomechanical perspective, that evolved to looking at performance in a broader sense.

He began as the Southern Steel's performance analyst in 2012 and, more recently, has managed the process from a higher level.

He linked with Otago rugby in 2013, and has also worked with World Rugby.

His time with the Steel included a stint working alongside now Silver Ferns coach Noeline Taurua in 2016.

It was an approach from her that landed him his new position.

He has enjoyed his involvement so far and, while the specifics of the trade are closely guarded, he offered a broad description both of what he does and teaches others to do.

''The analyst's role really is to capture information about performance.

''They use video, they use stats, they use all that type of stuff in general to help inform better decision making.''

He felt the influence of technology in the profession would continue to grow.

Drones were becoming more common as a way to collect video footage, while artificial intelligence was another big area for growth.

Keeping the polytechnic's course up to date and relevant to the industry was a big focus in that regard.

It had a very good record of producing graduates who secure performance analysis jobs with high-level teams.

Another focus was monitoring the quality of those jobs and learning more about the working conditions.